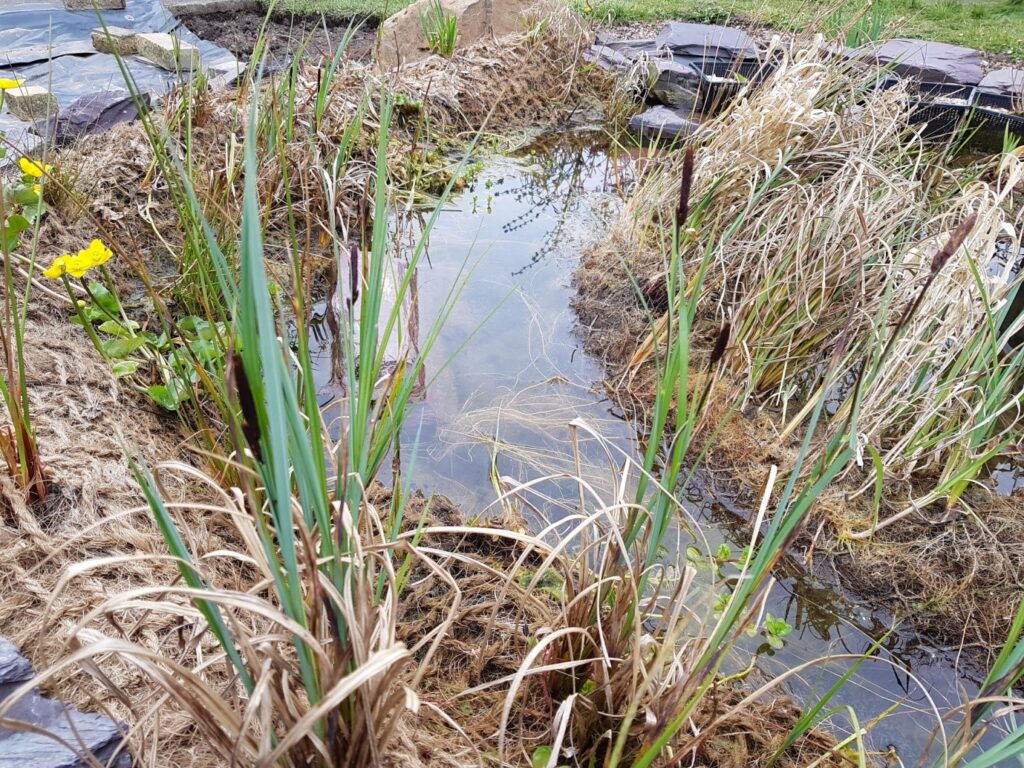 Last time I wrote about my new pond (A Welsh Garden Pond For Wildlife and Wellbeing), I was blissfully unaware of the invasion of algae that was soon to come! The plants died back in the winter, and several of them died completely, possibly not responding well to living in containers, or to me not considering how much the water level would fluctuate throughout the year when carefully researching the best depth to position them! All three water mint plants have disappeared completely, finding themselves too far underwater, and there’s no sign of the purple loosestrife making a comeback, although I’m still holding out hope for some new growth as the spring progresses. 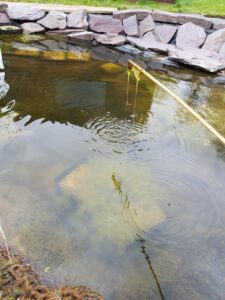 By far the greatest problem our new pond has faced, however, is the algae. With some plants gone completely and the others still small and immature, apparently they haven’t been absorbing nutrients at a fast enough rate to limit the growth of the algae. I’d heard that this is a common problem for new ponds, so spent many an hour fishing the algae out of the pond with a bamboo cane. Last time I wrote about my pond I talked about how much it had benefited my health and wellbeing, and, I have to say, fishing out algae is also strangely therapeutic.

The two pond snails that were introduced to the pond with one of the plants we bought last summer have reproduced very successfully, leaving me painstakingly removing them from clumps of algae and returning them to the pond. I also often pulled out many different instars of common darter larvae with the algae, always safely returning them to the water, and the occasional damselfly larva as well. We decided to place some chicken wire over part of the pond and draped the algae we removed over it, just in case any smaller snails or larvae had been missed in the inspection. I did see one small common darter larva wiggle its way free and drop down through the gaps in the chicken wire back into the pond.

We investigated different methods for controlling the algae, automatically ruling out any chemical interventions. I did look into barley straw, but encountered mixed reviews of its success, so in the end we decided our best hope was to introduce more plants, hoping they will keep the nutrient levels down in the water, preventing the excessive growth of algae. Given the mixed success we’ve had so far with our container plants, we opted for a different approach. We decided to order pre-planted coir mats from Habitat Aid, which are placed around the edge of the pond and have the added benefit of concealing the liner, making the pond look more natural. The plants in these mats are advertised as being “semi-mature”, and the video tutorial showed an impressive root network, which I hope means they are less likely to die in my care! 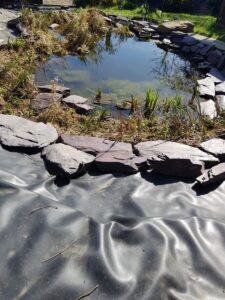 We ordered four 2mx0.5m mats, and a 3m pre-planted coir roll to place on one of the shelves in the pond. Between them, the mats and roll would include ten native plant species: purple loosestrife, flag iris, marsh marigold, water mint, water speedwell, gypsywort, soft rush, lesser pond sedge, reed canary grass and reed sweet grass.

We were really pleased with the mats and roll when they arrived. The root networks were indeed extensive, and there were already signs of new growth on the marsh marigolds and flag iris. We struggled a bit with moving the roll, which was heavier than I’d anticipated, and failed to get it to stay upright on the uneven shelf we placed it on in the pond. We’re hoping the plants will adapt to the slight slant and start growing upright after a while!

The mats on the other hand were really easy to move and position. Part of the mat is positioned out of the water, coming up over the edge of the pond to cover the liner and, in our case, held down by rocks, but the water wicks up through the coir to reach the plants near the top.

Of course, when you add eight metres of coir mats and a three metre coir roll into your pond, it not only displaces a significant amount of water but inevitably changes the topography of the pond so that the lowest point is no longer the lowest point…  so the bog garden we had created next to the pond where the water would overflow after heavy rain was no longer in the right place! The bog garden has now been extended into this new area of overflow, and the good news is I have an excuse to buy some more bog plants. This time I will be looking for wildlife-friendly species that like wet ground but can also survive if the ground dries out, as it was a challenge keeping the bog garden wet enough last summer. 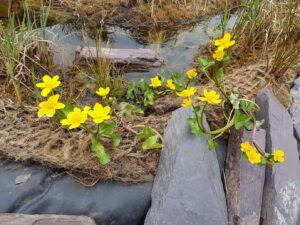 We put the mats and roll in a couple of weeks ago, and there’s already been considerable growth of many of the plants, and the marsh marigolds are flowering. So now I’m waiting for the summer, hoping the plants will all survive! In the meantime, the empty pots that had, for a short while, contained living plants, I’m insisting on leaving in the pond as the edges are covered with the distinctive jelly-like eggs of the pond snails, and given that pond snails eat algae I want to give their population all the help I can! 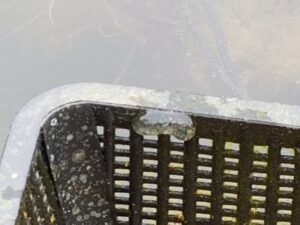 Our next step is to create a flower bed at the top of the pond and to finish the landscaping around the edges. I’m hoping that next time I write the landscaping will be almost done, the pond plants will be growing, the dragonflies will be back, and the algae will be under control…!