There are three stages in the life-cycle of all dragonflies: egg, larva (also known as a nymph) and adult.

Female dragonflies can lay hundreds of eggs during their adult lives, in batches over a few days or even weeks.

Endophytic eggs are elongated in shape and are laid into plant material. All damselflies and hawker dragonflies have scythe-like ovipositors and inject their eggs into plant stems or leaves, rotten wood or mud on or close to the surface of the water. Emerald damselflies and Migrant Hawkers inject their eggs into rush stems well above the water surface, while other hawkers lay into rotten wood or other debris just above the waterline (see Brown Hawkers, right). The Golden-ringed Dragonfly lays its eggs by hovering vertically and stabbing its abdomen into stream-beds.

Exophytic eggs are round in shape, laid in a jelly-like substance and are deposited loosely into water. Species that lay this type of egg include some emerald dragonflies as well as chasers, skimmers and darters. They do this by repeatedly dipping the tips of their abdomens into water, each time releasing one or more eggs that settle below the surface.

During egg-laying, male damselflies, chasers, skimmers and darters guard the females with which they have just mated, either by staying linked ‘in tandem’ or by flying in close attendance. Some female damselflies submerge completely to lay their eggs, often using their still-attached partner to pull them up again afterwards.

Eggs hatch either within 2–5 weeks or, in the case of the emerald damselflies and some hawkers and darters, the following spring. 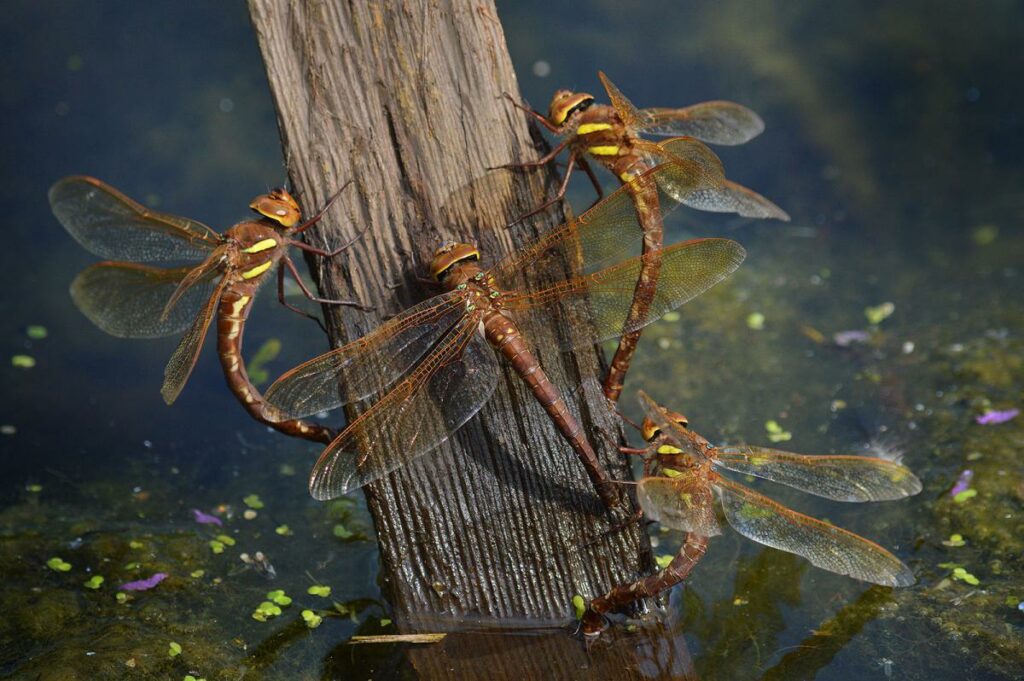 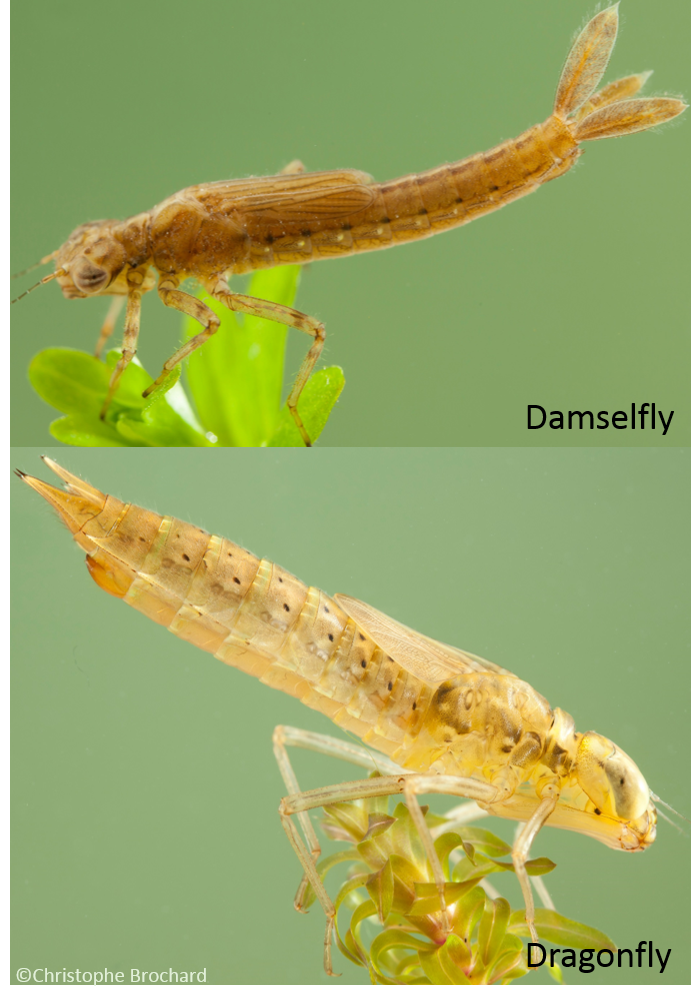 A tiny tadpole-like prolarva emerges from the egg. If the egg is laid above water, the prolarva wriggles to safety as soon as it hatches and moults within a few hours. Prolarvae that hatch below water moult almost immediately.

Dragonflies spend most of their lives in their larval stage. During its time the dragonfly catches and eats live prey at every opportunity, moulting a further 5–14 times until it is fully-grown. Larval development typically takes one or two years, but ranges from 2–3 months (emerald damselflies) to more than five years (Golden-ringed Dragonfly). Development takes longer in cooler waters where food is scarcer, whilst in warm waters there may be a new generation every year.

Damselfly larvae can be separated from Dragonfly larvae by their caudal lamellae, which are fin-like structures at the end of their abdomen that act as external gills.

All dragonfly larvae have six legs (as do adults), wing-sheaths, an extendable hinged jaw (labium) that can shoot out in an instant and catch prey. Prey includes insect larvae, crustaceans, worms, snails, leeches, tadpoles and small fish. Dragonfly larvae themselves can fall victim to predators, including other dragonfly larvae, fish and waterfowl.

The larvae of some species are covered in hairs that collect silt or organic debris from the soft sediment within which they live. Others are coloured green and/or brown, which helps to provide camouflage amongst the submerged plants and algae they inhabit. Species living in bottom sediments have relatively poor eyesight, but instead use their hairs, long legs and antennae to sense prey. By contrast, hawkers have large eyes and hunt by sight amongst plants nearer the surface.

Dragonflies undergo incomplete metamorphosis; unlike other winged insects, such as butterflies, dragonflies do not have a pupal stage and transition straight from a larva to an adult. This transition, the final larval moult, takes place out of water. This metamorphosis is triggered by day length and temperature, and is synchronised in some species, such as Emperor Dragonfly.

The final-stage larvae sit in shallow water, near the margins, for several days, getting ready for their final moult and starting to breathe air. Most species leave the water during the morning, but hawkers do so under cover of darkness. Larvae climb up emergent vegetation, although some may walk several metres over dry land before finding somewhere suitable to emerge. After finding a secure support, they redistribute their body fluids, pushing the thorax, head, legs and wings out of the larval skin. There is then a pause of about 30 minutes to allow their legs to harden enough for the next stage, when the abdomen is withdrawn. The wings, and then the abdomen, are expanded and start to harden. This process leaves behind a cast skin, called an exuvia, and the whole process lasts between one hour (Damselflies) to three hours (Dragonflies).

The dragonfly’s first flight (maiden flight) is weak and typically covers only a few metres. At such times, dragonflies are especially vulnerable to predation by birds, such as the Hobby. Other hazards include rainfall, which can damage soft tissue during emergence. 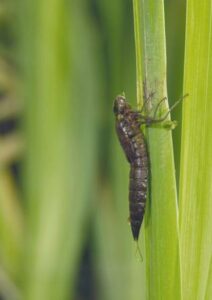 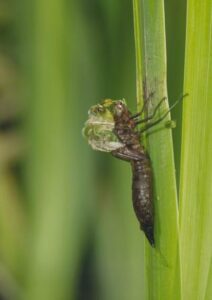 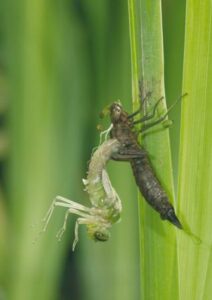 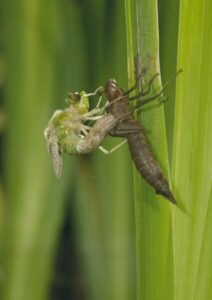 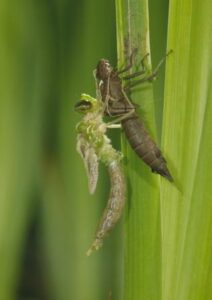 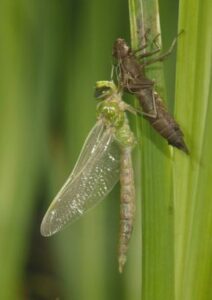 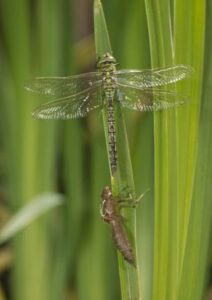 Emergence sequence of a hawker dragonfly. 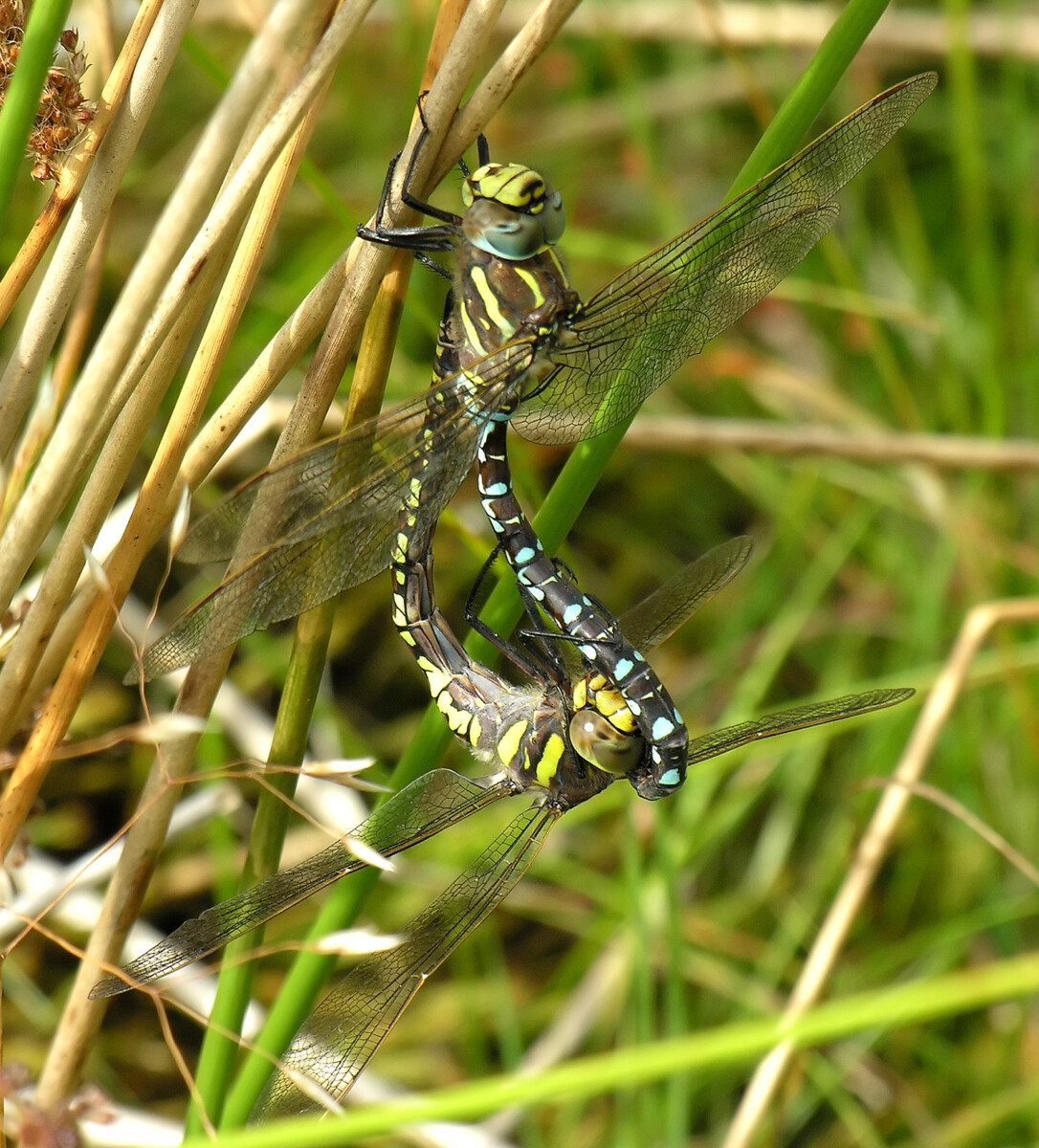 Tenerals are newly-emerged adult dragonflies that are weak in flight and pale in colouration. As the body and wings harden off they begin hunting for food whenever fine weather permits. They spend about a week feeding away from water and gradually acquire adult colouration and sexual maturity.

When mature, adults move back to the water to breed. The males of some species are territorial and battle constantly to obtain and defend a suitable breeding sites. They investigate any male intruders, as well as females, which they will try to seize and mate with. Territorial species are always found in smaller numbers than gregarious species, such as the blue Damselflies, which may be present in hordes.

Mating in dragonflies is unique. The male first transfers sperm from near the tip of his abdomen to accessory genitalia near the top of the abdomen. He then grasps a female by the back of the head with his abdominal claspers (tandem position). The female curls the tip of her abdomen to meet the male’s accessory genitalia and sperm is transferred (the wheel position). This process can take a few seconds (in species of Chasers) or many hours (Blue-tailed Damselflies).

The life-expectancy of adults is short, typically no more than a week or two, but sometimes they can last 6–8 weeks. Adult dragonflies have voracious appetites, and can be observed hunting other flying insects, particularly small flies, on sunny days.

Not found what you want? Try our FAQ Page.