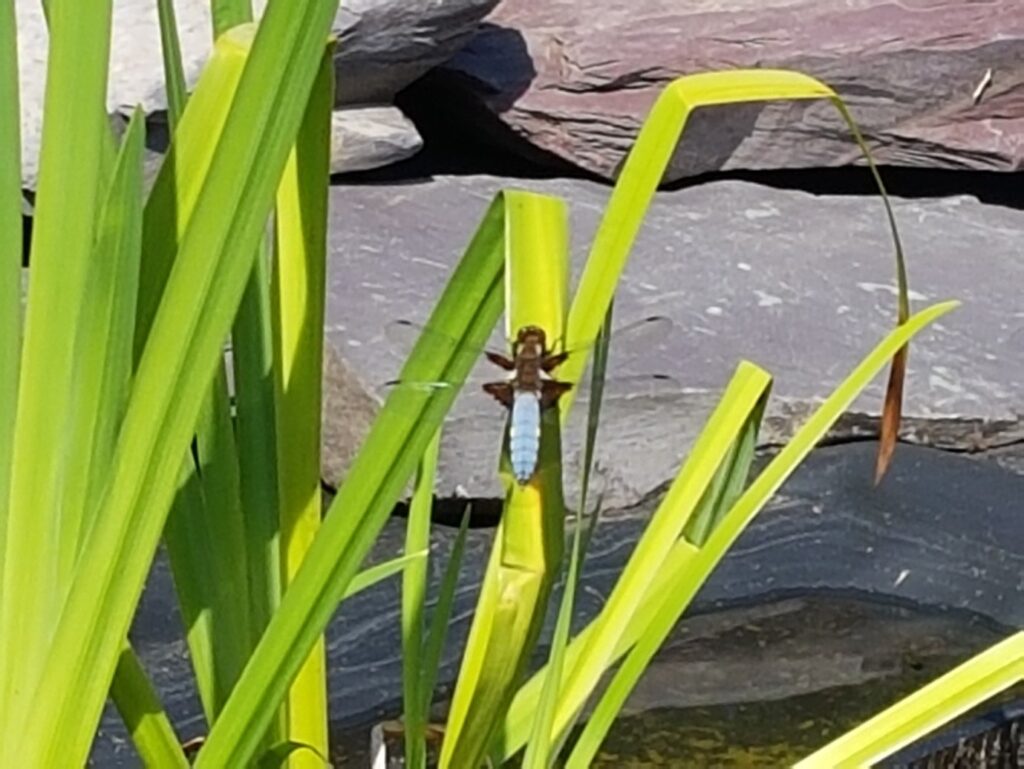 Pond Ponderings – A Welsh garden pond for wildlife and wellbeing, by Pamela Styles

“I’d dreamed of my own pond ever since I was in primary school. My best friend had a pond in her back garden and I used to love going round there and trying to catch newts. When I began volunteering for The Wildlife Trusts in 2008, one of my first experiences was pond dipping, and I was absolutely captivated. I caught something huge and called the leader over, unsure what I’d found. Soon everyone had crowded around me, as it turned out to be a great crested newt. No one had known they were there (or we would have been using a different pond for dipping!). I was hooked.

By the time I graduated from my PhD, I’d made up my mind that I wanted to work in environmental education, so pond dipping became an almost daily activity for me every year between May and September. I never got bored of it. I did pond creature shows for children about blood-sucking fish lice and flatworms that could re-grow their heads if they got bitten off. We would watch in horror as a great diving beetle larva latched its jaws on to a three-spined stickleback, injected it with digestive enzymes and left nothing behind but the bones and scales. 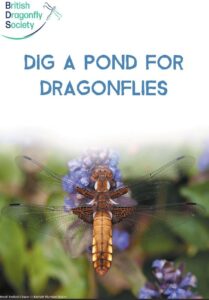 After attending a training day with the British Dragonfly Society, I became fascinated not just by the larvae I’d been catching in the pond, but the adult dragonflies too. I’d always liked to see them, but they’d all just been “dragonflies” or “damselflies”, I’d never thought about identifying any further than that. That changed after the training, and I started learning the key identifying features of my local dragonflies, trying to identify each one I saw. Not long after, I was leading dragonfly walks as part of my job, and recommending the British Dragonfly Society’s “Dig A Pond For Dragonflies” guide to as many visitors to the reserve as I could, all the while dreaming of using it to create my own pond.

When my husband and I were house hunting, every garden was being evaluated through the eyes of “where would the pond go?”. We settled on a house with an amazing three tiered garden. The middle tier was mostly lawn, and despite it being on a slope, we decided this would be a perfect place for a pond – an open space with lots of sun and potential. The house and garden needed a lot of work doing on it, so the pond would have to wait, but it was exciting being able to picture where it would go.

In April 2014, two months after landing my dream job as Learning Manager for the Wildfowl and Wetlands Trust (WWT), I became seriously ill. In December 2015, I was diagnosed with postural tachycardia syndrome. The condition prevents me from standing for all but the shortest periods of time, and requires me to rest with my feet elevated as much as possible. Leading educational visits out on a reserve became impossible to manage, and so in January 2017 I made a difficult decision and left my job, taking a role that would be physically easier to manage.

No longer able to help with any of the more strenuous aspects of gardening (and having seen many of my seedlings I planted optimistically each spring die as I was too unwell to maintain the garden in the summer), my husband took on all the hard work. In summer 2018 we marked out the outline of the pond with a rope, measuring five metres long by three metres wide. My husband began digging with me sitting on the sidelines giving instructions, referring to the BDS guide, which I had open on my phone. 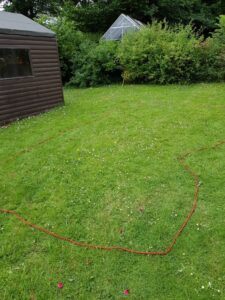 He dug a little bit at a time, 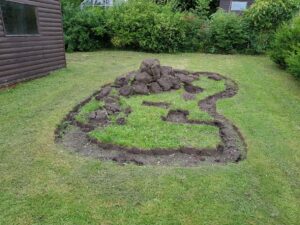 struggling himself with an injury (which, long after the pond was complete, was revealed to be a fractured vertebra). We ordered a range of plants that were listed in the BDS guide, with the primary purpose of attracting different dragonfly species and supporting them at different stages of their lifecycle: submerged plants like spiked water-milfoil and rigid hornwort, floating frogbit and white water lily, and marginal plants like flag iris, purple loosestrife and marsh marigold. 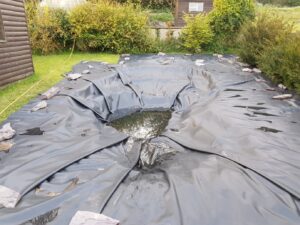 We used the topsoil that was removed to fill some new raised beds in the vegetable patch, and two enormous boulders that my husband discovered while digging he somehow managed to push to the edges, where they would eventually become part of the landscaping. We decided on a butyl liner as the most durable option, and fitted it into position.

We decided to put the plants into baskets in an attempt to make the ongoing maintenance easier. Getting the basket containing the white water lily to the deepest part of the pond, over a metre down and in the centre, turned out to be something we should have done before we filled the pond with rainwater! The other baskets were all positioned at the appropriate depths. 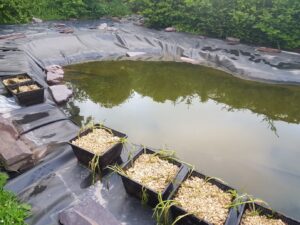 We started landscaping around the pond with local Welsh 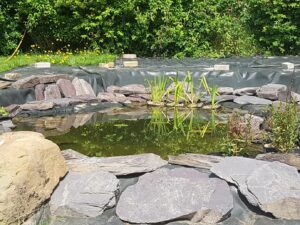 plum slate, and my husband repurposed some old wood to make me my very own pond dipping platform! The pond itself was complete in spring 2019. The landscaping still isn’t finished, that might take another year or even longer, but the dragonflies don’t care about that! Almost immediately, common darters were flying around checking out the pond. 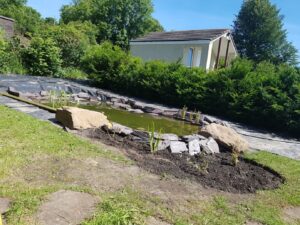 We soon realised that no matter how carefully you plan and calculate, if you put a pond on a slope, there’s always going to be a place where the water seeps out during heavy rain, something we see a lot of here in Wales! So we decided to create a bog garden at the lowest point, planting flag iris and purple loosestrife into the wet ground.

As soon as summer arrived the plants grew quite quickly, and I was pleased to see them all flowering in their first year, with common darters frequently perching on top of them! 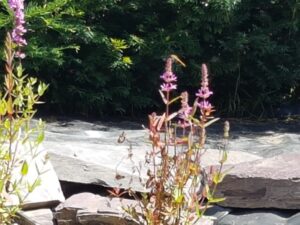 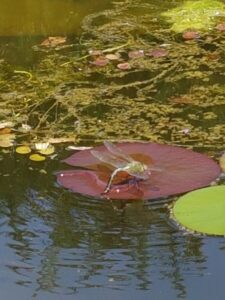 Every time a new dragonfly species arrived, or I saw another female ovipositing, I would excitedly announce this to my husband with surprise and amazement in my voice, and he would remind me that we had indeed planned every detail of the pond – its size, depth, shape, structure, levels and plants – for this to happen. But it didn’t take anything away from my amazement. A female emperor visited twice while I was watching to lay her eggs, and I was surprised to see such a large dragonfly at a garden pond. Looking up the emperor in my dragonfly book, I learnt that emperors commonly oviposit in brand new ponds, so I imagine I might not see her again next year.

In summer 2019, my health took another turn for the worse, and every moment I wasn’t working was spent resting with my feet elevated. But the summer weather was actually quite good, which meant for the first time I could now spend my recovery time sat next to my very own pond. I sat there for hours on end in the summer, every day that I possibly could. I charted the gradual arrival of new species as the pond became more established. I watched in horror as a greater water boatman chased the only water measurer in the pond as it darted across the surface. I watched a male great diving beetle come up and down, trapping air under his carapace and hoping for a female to arrive. Finally, in the autumn, one did, and the first time I saw her was with the male mounting her, the suction cups on his front legs holding on to her. He didn’t waste any time!

Common darters were the first of the dragonflies to lay their eggs, so I looked up how long it would take for them to hatch, and shortly after I saw the first larvae, disguising themselves in the mud at the bottom of the pond.

The two pond snails that had been introduced with one of the plants didn’t waste any time either, and now the pond is full of them. The first water boatman, the one that had chased (but not caught) my beloved water measurer, laid many eggs, and now hundreds of her tiny progeny dart around through the water.

My heart has leapt with joy and excitement at so many things that have happened in the pond, like when I peered down and saw the first flower bud appear at the base of the water lily, which finally, after several weeks, made its way to the surface. Watching the life in my pond is like my very own nature documentary. I’ll be so excited if and when I find my first exuvia!

During the summer, one male common darter seemed to take ownership of the pond, trying to chase off any others that came near, even a female who sat in the nearby yew hedge, accompanied by me shouting “what are you doing?!” as if he would understand me. Others came and went as the season went on: blue-tailed damselflies (which also laid their eggs) and emperor, southern hawker, migrant hawker and broad-bodied chaser dragonflies. 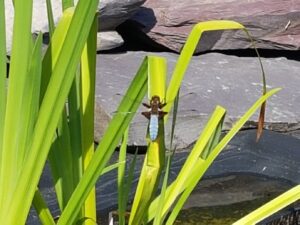 I love my pond. It has given me a sanctuary to rest and recover. Somewhere to slow down and sit peacefully, not distracted by technology or the over-stimulation of modern life. I never know what new creature I’m going to see, and I sit happily, close-focus binoculars on hand just in case, and feel a measurable reduction in the symptoms of my condition. My mind and body experience peace, contentment and relaxation. I can’t wait to see what next dragonfly season brings.”