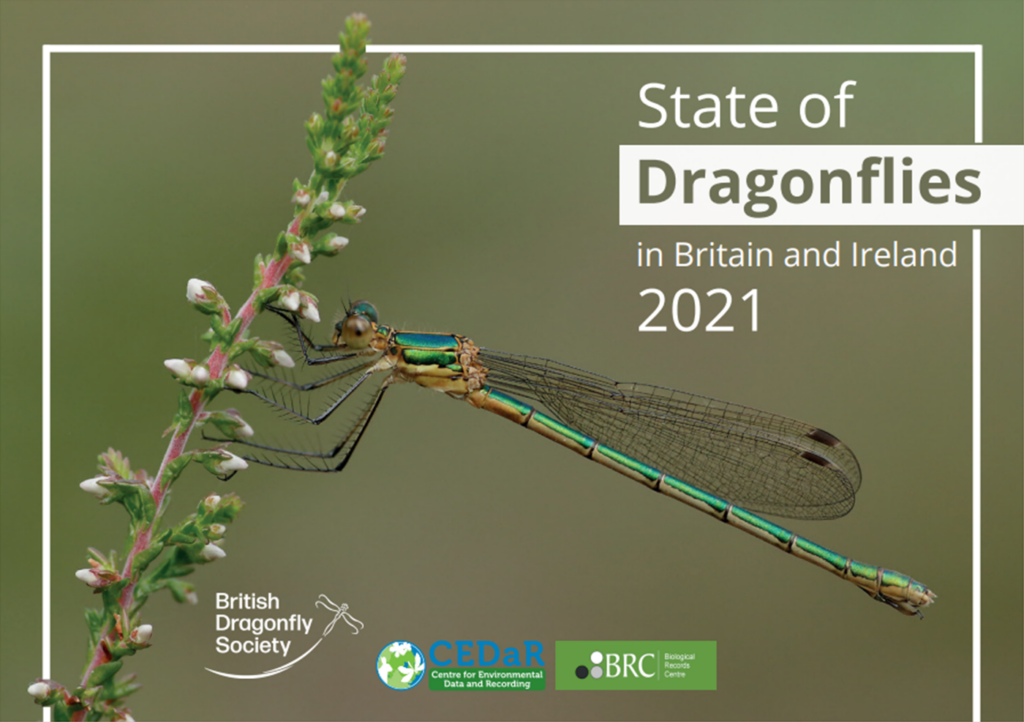 More dragonflies are gaining than losing from climate change, but is this good news?

The full report can be accessed here.

The State of Dragonflies in Britain and Ireland 2021 report, just published online by the British Dragonfly Society (BDS), shows that dragonflies are bucking the trend of declining species in Britain and Ireland. In the dragonfly world there have been far more gains than losses. Over 40% of resident and regular migrant species have increased since 1970, while only 11% have declined. Although this sounds like good news for dragonflies, it is in fact yet another indicator of climate change. Dragonflies are a mainly tropical group of insects, so most will benefit from rising
average temperatures.

Emperor Dragonfly has shown the largest increase. Found mainly in England and south Wales until the 1990s, the species crossed the Irish Sea in 2000, before spreading rapidly through Ireland. It has also spread northwards in England and Wales, reaching Scotland in 2003. Migrant Hawker and Black-tailed Skimmer have shown similar increases and range expansions to a slightly lesser extent.

In total, 19 of our 46 resident and regular migrant dragonfly and damselfly species have increased in Britain and Ireland, while just five have declined.

In addition, we have gained eight new species since 1995 and two others have reappeared after a long gap in their records. Some of these species have since colonised with Small Red-eyed Damselfly, Willow Emerald Damselfly and Southern Migrant Hawker spreading most rapidly in recent years. This increased rate of immigration and colonisation by species with a more southern distribution in Europe is unprecedented in modern times and clearly shows how our climate is changing to one more commonly found on the Continent.

Of our resident species, Emerald Damselfly, Black Darter and Common Hawker have shown the greatest declines, although all three can still be found in good numbers at suitable sites. Habitat changes are likely to be responsible for some of the declines, although the effects of climate change, extreme weather events and changes in land management are often hard to unravel from each other. It is interesting to note that two of these species have a mainly upland or northern distribution, which could mean habitat changes in these areas are having the worst
effects.

The State of Dragonflies 2021 report covers a 50-year period from 1970 to 2019 and is based on over 1.4 million dragonfly records from 17,000 recorders, including contributions from the Centre for Environmental Data and Recording in Ireland. Virtually all dragonfly records are collected by volunteers, before being checked and verified by a network of over 50 County Dragonfly Recorders, who themselves are mainly volunteers. The verified records resulting from the BDS Recording Scheme were analysed by the UK Centre for Ecology & Hydrology and this report is based on
the population trends produced.

About the British Dragonfly Society
The British Dragonfly Society (BDS) was founded in 1983 by a small group of dragonfly enthusiasts and scientists. The Society has grown substantially since that time and the current BDS membership of over 2000 is spread the length and breadth of the country, as well as into Europe and beyond. The BDS has three main aims: to promote the recording and surveying of dragonflies, to conserve dragonflies and their wetland habitats, and to engage the public with dragonflies. The Society runs an annual series of indoor and outdoor meetings, provides training on dragonfly
identification and site management and works with partners to set up Dragonfly Hotspots. These are accessible sites where people can engage with and learn about dragonflies.

About the Centre for Environmental Data and Recording (CEDaR)
CEDaR is the Local Environmental Records Centre for Northern Ireland and its coastal waters, working in partnership with Northern Ireland Environment Agency, National Museums NI and the recording community. CEDaR helps to gather and record information about local wildlife and habitats. This information is stored on its databases and shared widely to inform policy, decision-making, environmental management, research, planning and conservation.

The full press pack can be accessed here.