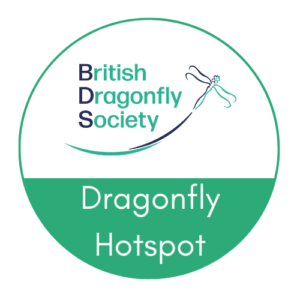 Thursley Common is part of the Thursley National Nature Reserve, managed by Natural England, and is a designated Site of Specific Scientific Interest. This is in recognition of the site’s remarkable wildlife and its diversity of habitats. The open water habitats, including the acidic bog pools, ditches and ponds support diverse communities of freshwater invertebrates, including dragonflies. It really is a fantastic site!

Take a walk along the Common’s boardwalk on a summer’s day and, if you’re lucky, you’ll see a wide variety of species at different stages of their life cycle: emerging, breeding and egg-laying. There is always plenty to see throughout the season.

We officially launched this site as a Dragonfly Hotspot on 22nd August 2019, with special guests from Natural England: Lord Blencathra (Deputy Chair) and David Askew (Director Evidence) both gave speeches about the site. Our own long standing Records Officer, David Hepper, also gave a speech about why he put Thursley forward for this designation too. We were joined by many local partner organisations and the amazing team of Thursley volunteers to celebrate the Hotspot launch. The information board that was unveiled on the day has now been installed on Pine Island, by the Thursley volunteer team, to help visitors get to know the dragonflies that call this magical site home. You can watch a video of the event here, thanks to volunteer Dave Myers for putting it together! 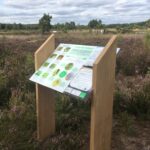 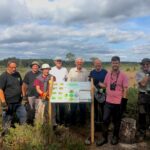 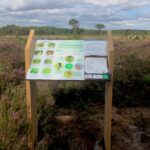 Above: Information board in situ on Pine Island thanks to the hard work of the Thursley volunteers (centre picture).

Bus: The reserve can be reached by the 46 bus (Winchester – North Baddesley). The nearest but stop is a 10 minute walk north up Thursley Road.

Train: the nearest train stations are Milford, Haslemere and Witley.

Bike: lock up facilities are available in the Moat car park

Opening times: all year round

All ability access: due to the soft sandy soils and steep slopes on parts of the reserve it is not accessible for wheelchairs. The boardwalks are fully buggy and pushchair accessible though.

Dogs allowed:  yes on leads and with responsible owners only please.

Facilities: car park, interpretation boards and board walks. No toilets on site but village pubs are situated within 3 miles of the site.

More information on the welcome sheet below:

A whopping 26 species of dragonflies and damselflies live around the open ponds and ditches of Thursley. Let us know which ones you see when you visit and feel free to share your photos with us too!

The Thursley volunteer group meets every week on Thrusday and once a month on Sunday. Over the winter work is focused on habitat management, while over the summer its all about site maintenance and wildlife surveys. Everyone is welcome to join and no previous experience is needed; volunteering is a great way to find out more about the wildlife on site, develop new skills and make new friends!

">Contact James Giles, the Reserve Manager, to find out more.

In order to manage the site in the best way possible for Dragonflies it is really important that the site management team know which species are there, and how they are doing.

If you are taking a trip to Thursley Common remember to report the species that you see.  If you are new to recording you can find more information here. Please report your sightings via iRecord here.

If you would like to get involved with recording Dragonflies on a regular basis at Thursley Common ">contact James Giles, the Reserve Manager, to find out more.