Unlike the migrations of birds, and even of some butterflies, dragonfly migration is poorly understood, and its relevance to conservation unknown.The Migrant Dragonfly Project aims to remedy this by improving our understanding of dragonfly migration and the reasons for it.

Although many adult dragonflies remain relatively close to where they emerged, certain species sometimes undertake long distance movements or migrations. In Britain, migration is most obvious in the occasional appearance of non-resident species, such as the Vagrant Emperor from sub-Saharan Africa and the Middle East. However, there are also influxes from the Continent of several species which already occur here as residents, for example the yearly arrival of Migrant Hawkers from Europe.

Recent results indicate that a number of migrant dragonfly species appear to be becoming more common in Britain than they were earlier this century, for example the Red-veined Darter and Lesser Emperor. We therefore hope that the Migrant Dragonfly Project will also provide us with a better understanding of the range changes which many European dragonflies appear to be experiencing.

A number of other species have turned up on a few occasions, and it is likely that further species will be added to the list in the coming years, such as the addition of an American species, Common Green Darner Anax junius, to the full list of non-resident migrant species in the autumn of 1998.

Observers are encouraged to submit records of migrants they have seen to the Migrant Dragonfly Project. Information is urgently wanted not only on the rarer species, but also on immigration of the common species which also occur as residents in Britain. Such immigration can often be detected by sightings of either obvious directional movements, unusual numbers of individuals, or by the presence of dragonflies in atypical habitats.

Records should be submitted to the Project Co-ordinator, Adrian Parr (email; 10 Orchard Way, Barrow, Bury St. Edmunds, Suffolk IP29 5BX). Special recording forms are available for those who wish to become more than casually involved; observers are kindly requested to provide written or photographic evidence to support claims of extreme rarities. Results are summarised each year in the Journal of the British Dragonfly Society. 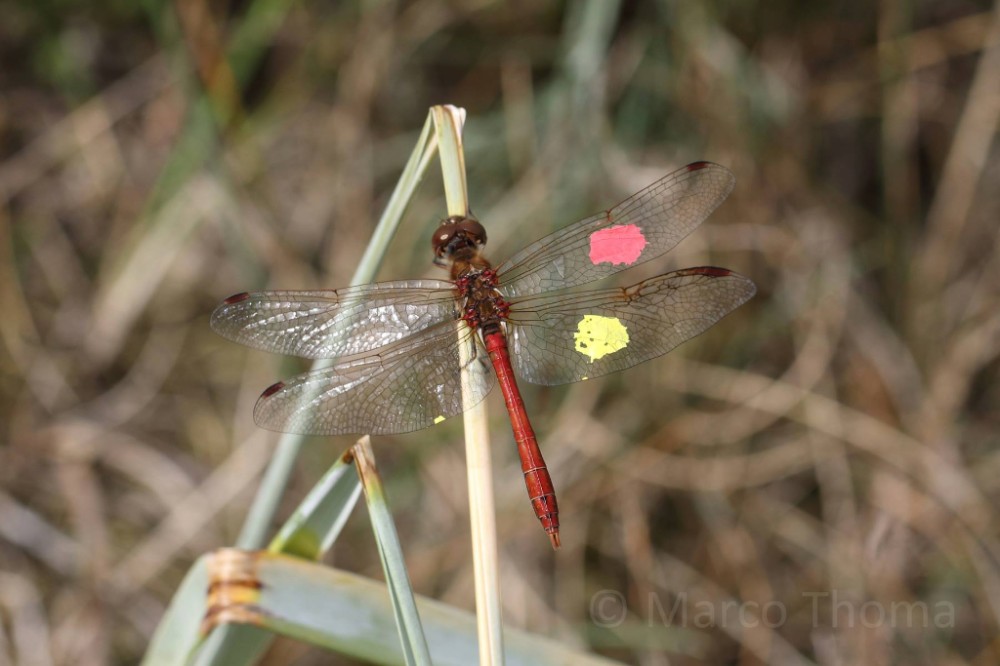 Researchers at the Pape Bird Ringing Station in Southern Latvia have recently embarked on an exciting project looking at dragonfly migration. The team are looking at the timing and patterns of dragonfly migratory movements through Southern Latvia and beyond, with a hope to discover more about when and how far dragonflies migrate and reveal information on their migratory paths. Part of this project, which is supported by the Laboratory of Ornithology of the Institute of Biology of the University of Latvia (Latvijas Universitātes Bioloģijas institūts), has involved the colour marking of individual dragonflies. It is hoped that recoveries and sightings of these marked individuals will be made throughout Europe. The insects are marked with two colours, indicating where they were marked and when.

If you see a dragonfly marked like the one pictured right, please report your sighting to the project, ideally with a photograph of the individual seen. In your record you should include the species of dragonfly which was marked, the date it was seen, the location it was seen in and the colour mark combination.

Help us promote the project 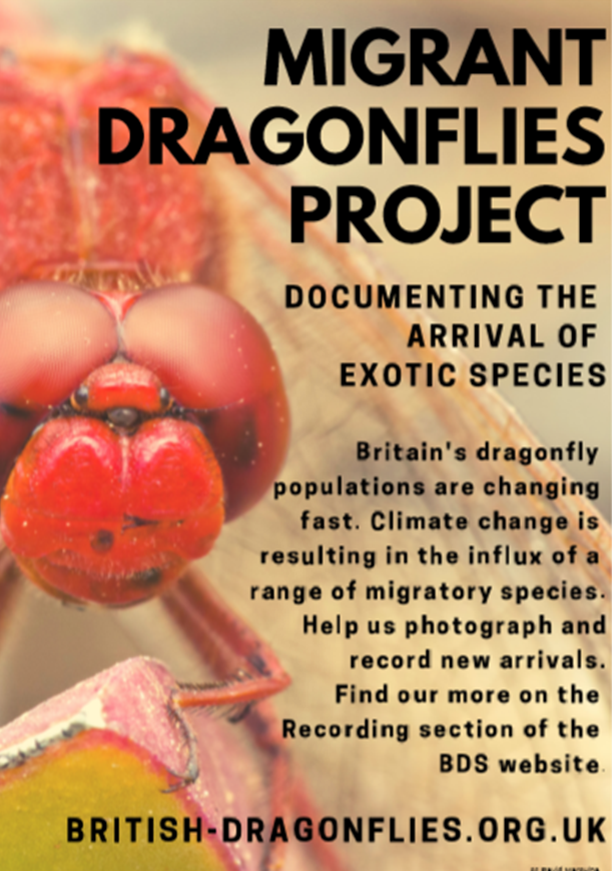