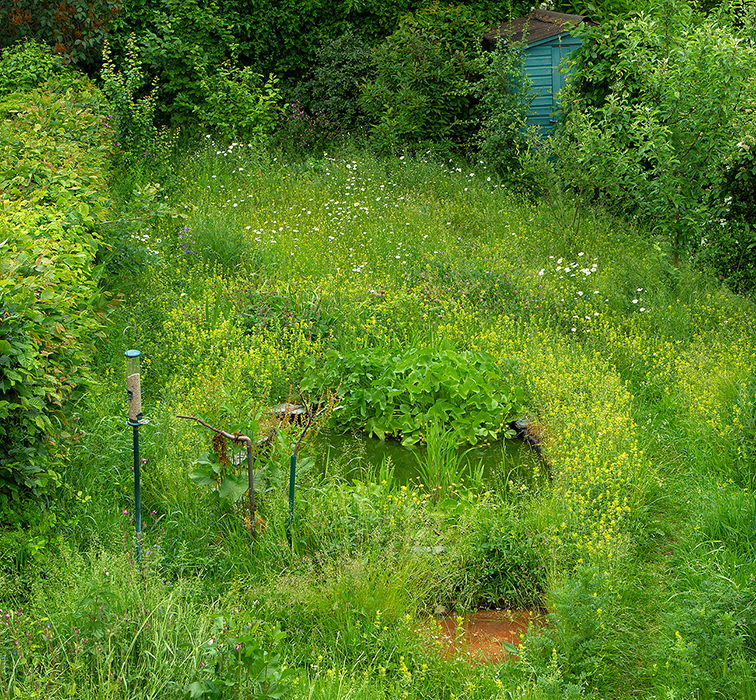 Pond Ponderings: From a Redesigned Mature Pond in Suburban Suffolk!

We are so excited to introduce you to another Pond Ponderings writer – David Schenck from Suffolk. Over to David:

“I have loved nature for as long as I can remember, certainly before I was old enough to go to school. I used to spend hours peering into our garden pond in the 1960’s and marvelling at the different creatures to be found living there. There were many frogs, toads and newts that used the pond for spawning and I would watch the progress of their tadpoles each year. There was much invertebrate life there too which was also a fascination to me. We lived about a mile from Gatwick airport and one negative aspect of this was that I often had to use newspaper on the surface of the pond to take off the thin coating of oil that accumulated, presumably from fuel dumping.

I have lived in Ipswich, Suffolk since 1976 and continued to have a pond in my garden for most of that time. I moved to my current house 14 years ago and made creating a pond my number one job, as it is easily the best way to attract wildlife to a garden. I don’t have any fish in the pond as it is primarily for wildlife, although I may add some sticklebacks one day, as they are small and native. Goldfish are generally not recommended for a pond intended for wildlife though. I planted using native plants only to make it as natural as possible. Hornwort is a very good oxygenator and I also have amphibious bistort for the deeper part, the leaves giving some surface cover in the summer. The marginals include fool’s water cress, greater spearwort, marsh marigold and bog bean. I had been trying to attract elephant hawk moths to lay eggs on willowherb, a known favourite of theirs without any success. Then about five years ago, I started getting the caterpillars on the bog bean that was growing in the middle of the pond and have had them each year since. When I find any of these caterpillars, I usually captive rear them for their own safety, as they are obviously at risk of drowning otherwise.

In October 2017, the pond was getting very congested with plants, even though I kept taking small amounts out. After some consideration, I decided to empty the whole pond and make it a bit bigger and deeper. This was partly because my garden is on a slight slope and I originally made the pond so it was in a bit of a dip, rather than being on a level with the grass and making it harder to look into. When re-building, I made a small brick wall all the way round to bring it up a bit and make sure it was level. This wall being completely hidden once finished. Doing this made the pond about nine inches deeper than it used to be and did give rather steep edges. Ideally, a wildlife pond should be very shallow at the edges, gradually getting deeper, thus giving creatures easy access both in and crucially out of the water to prevent drowning. I have overcome this problem though by the way I have planted the pond and it does not now pose any problem to wildlife. 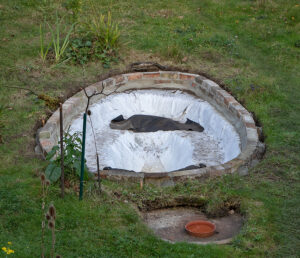 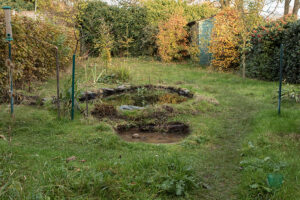 Regarding dragonflies and damselflies, when planting a pond, it is essential to have some plants that have stems growing well out of the water to enable the nymphs to climb up when it is time to emerge as adults. If they cannot do this, their wings are very likely to be deformed and they will not be able to fly. The same applies to other insects, such as butterflies and moths, so it is as well to bear this in mind. 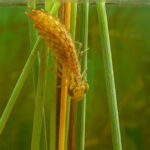 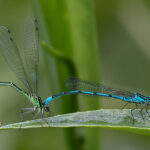 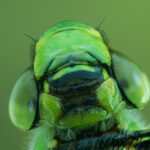 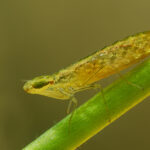 Although I have had ponds most of my life, I have not really seen many dragonflies emerge from them. In re-building my pond, I must have done something right, as this year I was very pleased to have around fifteen Southern Hawkers emerge as adults and I lost count of the number of Broad-bodied Chasers I had. Another interest of mine is photography and I try and record the life in my garden and elsewhere when I can. I managed to photograph some of the chasers (Broad-bodied Chaser emergence sequence below) as they were emerging which was always quite early in the morning but the Southern Hawkers tend to emerge from the pond during the night, so I did not get the full sequence of that, unfortunately. 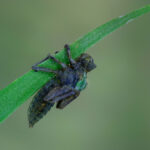 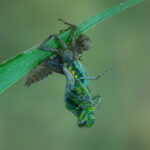 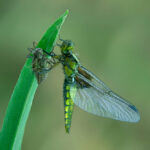 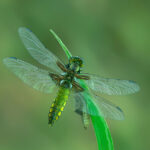 My garden is not big, about 65 by 26 feet and I live only a mile or so from Ipswich town centre but I have managed to attract a lot of wildlife to it. Apart from the pond, in 2012 I decided to turn the whole surrounding lawn into a mini wildflower meadow. All the plants I have added are native to the UK and grown from seed, planting them into the existing grass when they were big enough. The result is very colourful during the summer and the number of insects I get has increased dramatically.

It would be wonderful if more people devoted at least part of their garden to a pond and wildflower area, not just for their own benefit but also to mitigate some of the habitat loss that is causing wildlife to decline so much.”

If you’ve enjoyed David’s photography you can see more over on his website here. And if you are now feeling inspired to do some wildlife gardening of your own then take a look at our Gardening section for lots of useful information! Don’t forget to let us know how you get on too, perhaps you could be our next ‘Pond Ponderings’ writer!