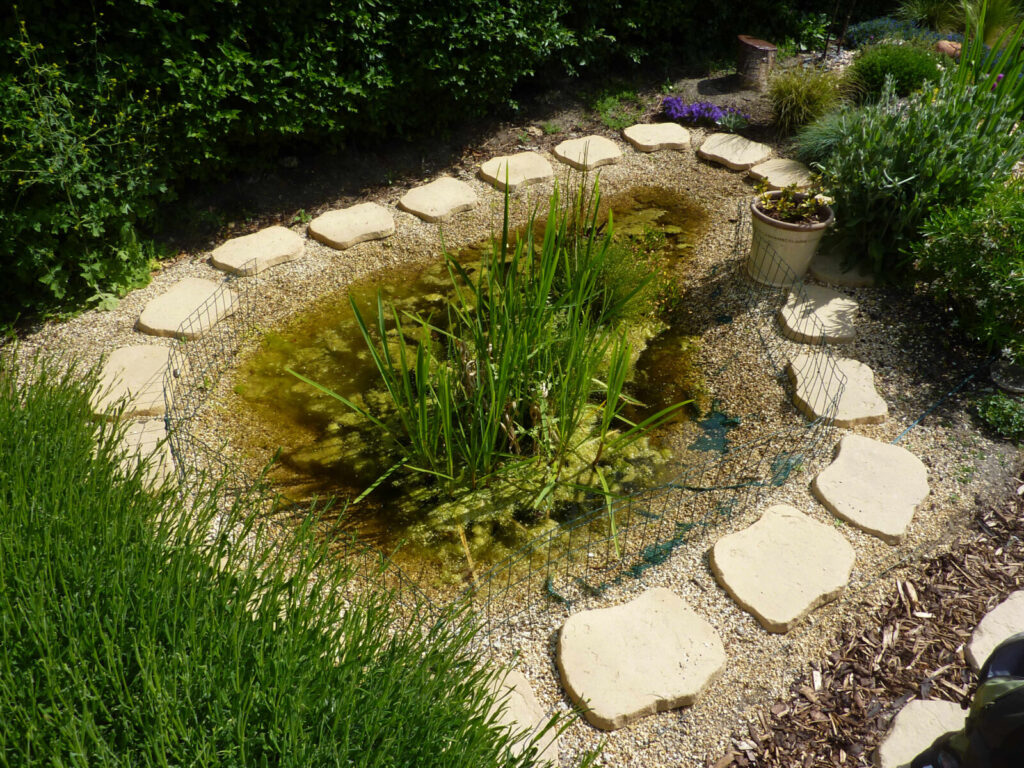 Pond Ponderings – Story of a Small Pond So Far, by Dan Brawn

Introducing another new writer, Dan Brawn based in Felixstowe:

“In June 2017, my wife and I moved to Felixstowe and acquired a narrow elongated garden of the type traditional for a Victorian terrace house. 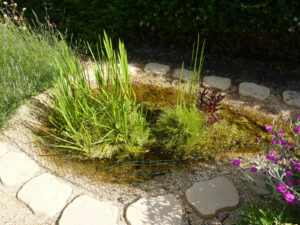 Building work needed on the old neglected and abused Victorian house took priority, then in March 2018, I built a small wildlife pond into the middle of the garden. From the start, it was aimed at dragonflies plus other insects, plant life and nature in general. Frogs and all the living things bar the aquatic plants arrived under their own steam. There will be no fish. The pond is roughly circular with a shallow extension, about 2.5 to 3 m2 with a deeper centre at about 60cm with mostly shallow edges that are flush with the ground level for the benefit of all wildlife. I tried to follow the guidelines offered by the BDS when building it. I decided to use the PVC type lining  which is guaranteed for many years but I later discovered that this type of lining  cannot be repaired if cut or torn so I will use rubber lining, next time. After a lot of thought, I also decided to lay horticultural grit down over the black PVC lining with small ornate concrete slabs about the edge. Then I filled the nascent pond with mains water and left it to stand for several weeks.

In its first phase, the pond was barely more just a pool of standing mains water, which after a heatwave became a pea soup of algae. Then a disturbingly large number of mosquito larvae invaded, which later proved a great food attraction for more desirable insects. The algae were soon sustaining an army of daphnia, which became in turn food for larger aquatic life. From early May, aquatic plants were put into submerged pots containing low nutrient compost.  Several varieties including vigorous reed sweet grass and other tall aquatic plants were placed centrally to provide the necessary climbing frames for any emerging dragons and general cover. 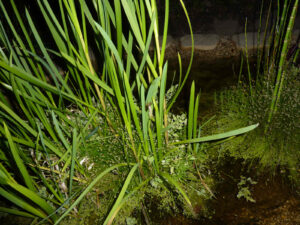 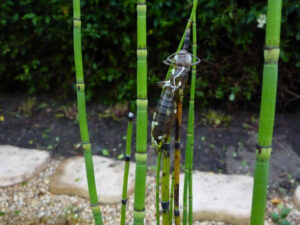 this abundance of live food and the aquatic plants soon attracted ovipositing dragonflies. I noted a Broad-bodied Chaser ovipositing in late May 2018, only a couple of months after pond construction. In September of the same year, there was a good deal of life in the pond, the local birds and hedgehog were using it frequently and at least three frogs had discovered its delights. In early October, I sent Pam at the BDS some photos of dragonfly larvae, which had become quite numerous in the pond. I was really surprised and very pleased to hear that they were Emperor dragonfly larvae . I later became rather familiar with the characteristics of these fearsome creatures but at the time, I had no idea that Emperors could breed in a new small pond or just how voracious they are. 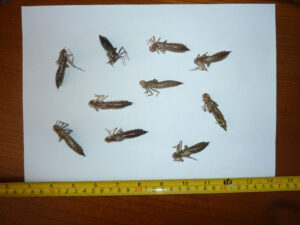 and the Emperor larvae woke up from their winter torpor in the spring of this year 2019. They were shortly in for a feast, as by early march the frogs had produced four quite large clumps of frog spawn which duly populated the pond with a great many tadpoles. Incredibly, all the tadpoles were eaten before they matured, an Emperor dragonfly normally remains a larva for two years but this feast of tadpoles allowed these Emperor larvae to emerge as adults in only one year, the first on 21st June and the last on 7th July this summer, 2019. A few Common Darters later emerged. I collected every exuvia after its occupant had departed the previous night. It was magic to rise early one morning before light and watch an Emperor, hanging out on those white threads, high up on a reed sweet grass, which I had put there for that purpose and then just as light came, to witness it fly off as an adult. In all, twelve Emperors emerged from the pond as is evidenced by my collection of exuvia. Now the pond is entering into its second winter and next year will be a different story.”