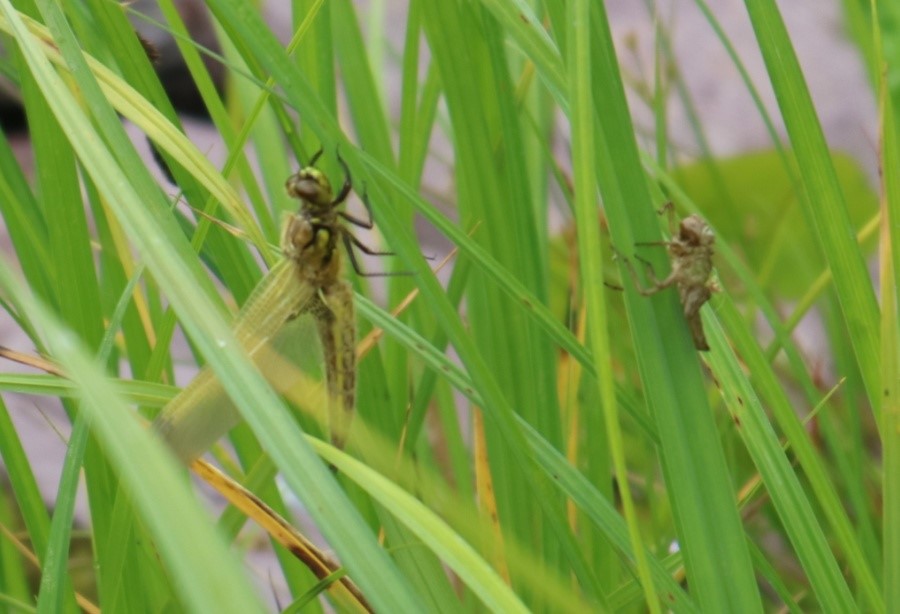 Pond Ponderings: Only one year old and full of dragonflies!

An update from Pamela Styles on her fairly new pond in Wales:

Now that we’ve reached the end of a summer that was very different than expected, I’m even more grateful for the wildlife pond in my garden than I was last year! I have spent immeasurable hours sitting beside it over the past six months, watching the flowers transition from the bright yellow of the marsh marigolds in early spring and the powder blue of water forget-me-nots, followed by the flag iris and the purple loosestrife. Now, most of the flowers have faded, with just the white water lilies still opening on sunny days, whilst the swollen seed pods of the flag iris are now bursting open and dropping their seeds. Having not left my home and garden for six months and unable to visit my favourite wild places, watching the changes to the flora and fauna of my pond have helped to keep me connected to nature and the changing of the seasons during these challenging times.

This has been the first full year that we’ve had the pond with the planting completed, and I have been absolutely amazed by the sheer number of dragonflies and damselflies it has attracted, as well as their diversity. This year I have recorded ten different species using the pond: 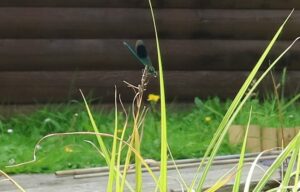 The banded demoiselle was the biggest surprise! I saw a male on two occasions, flitting around the pond and perching briefly on the vegetation and the adjacent hedge before flying back off towards the nearby river.

The golden ringed dragonflies were also welcome visitors, although one met a rather gruesome end and became a meal for a swarm of greater water boatmen, which dragged it all around the surface of the pond as they feasted on it, until by the end of the day there was barely anything left. 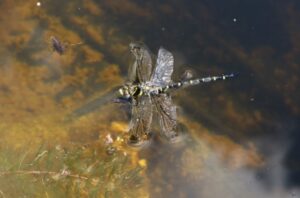 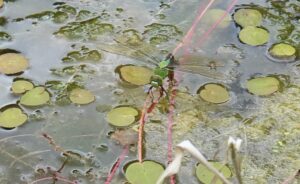 met its end, but when I’ve observed dragonflies ovipositing and lowering so much of their abdomen into the water, I’ve often wondered whether they’re putting themselves at considerable risk of predation from below by doing so. I watched a female emperor on several occasions almost completely submerging her abdomen into the pond, amazingly managing to balance herself by holding onto the leaves of frogbit.

I also enjoyed spotting the different colour forms of the blue-tailed damselflies in the late spring, and saw individuals with blue, green, red and violet thoraxes. 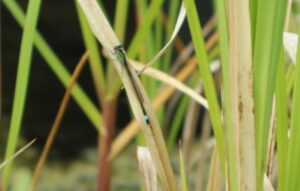 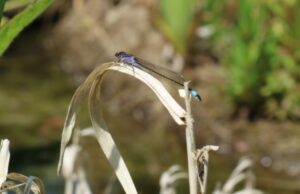 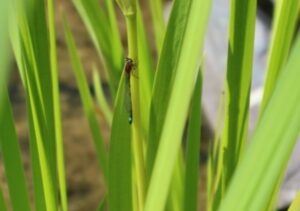 What has been even more amazing and impressive than the species visiting the pond has been the number of individuals emerging from it! As the pond is only a year old, I had hoped to see some emergence and to find a few exuviae, but wasn’t expecting too much. I was very mistaken! 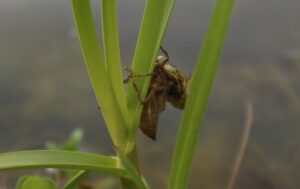 Over the course of the spring, over fifty broad-bodied chasers emerged, and I would head straight out to the pond on every sunny morning and invariably spot several of them preparing for their first flight! 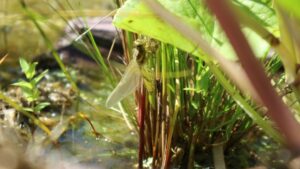 One of the first ones we spotted actually emerged on a brick that was on the ground beside the pond while we were still completing the landscaping! 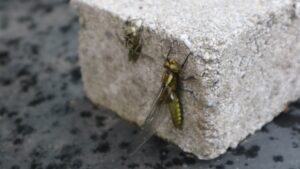 I even saw one four-spotted chaser emerge, even though on consulting my book, it suggested they normally don’t emerge until after two years. Hopefully there will be more to come next year. While only one emerged, several others visited the pond as adults. 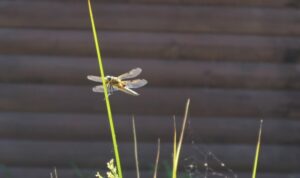 I started collecting all of the exuviae I came across and soon built up quite a collection. I am most proud of my two emperor exuviae (again, I was surprised they had emerged after only one year as larvae), which are much bigger than I’d anticipated (pictured with a common darter exuvia). 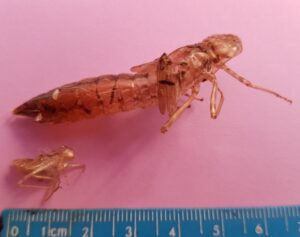 As well as the dragonflies, the pond has continued to attract a wide 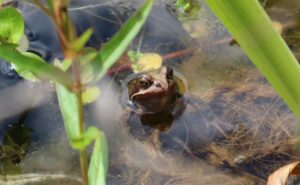 range of other species. There are at least three frogs resident now, as well as a pair of newts. The newts laid eggs, which have now hatched, but hopefully the amphibians won’t have too much of a negative impact on the population of dragonfly larvae.

I don’t expect to add any more new species to the list this year, but there are still male common darters fighting each other off trying to claim the pond as their territory, and two females that have been regularly laying eggs. The common darters also like to perch on the garden wall near to the pond and will let us approach very closely without taking off. 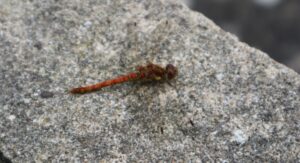 A female southern hawker is still an occasional visitor as well, ovipositing around the edges of the pond, including out of the water, which isn’t something I realised that they do until I observed her and then looked it up in my dragonfly book. She has laid eggs in partially submerged pots, on the plum slate rocks around the edges and even into our wooden ‘dipping platform’!

My battle with the algae continues… increasing the number of plants in the pond has gone some way to reducing the nutrients in the water and seemed to keep the algae at bay quite well during the spring and early summer when the plants were actively growing. Over the past couple of months I’ve had to scoop out clumps of algae quite regularly, but I always find myself torn, having seen dragonflies and damselflies laying their eggs into it!

I’m amazed by how much wildlife, particularly dragonflies, the pond has managed to attract in just one year. Hopefully we’ll have some nice weather going into the autumn now, and I will certainly continue to sit out beside my pond for as long as I can. This year, even more than before, the pond has provided a huge boost to my health and wellbeing.

Despite the date, a Winter Damselfly (Sympecma fusca) was spotted by Terry Crow on 5 May 2022 at Wildern LNR near Southampton. This is only the second ever recorded from Britain! It’s name relates to the fact adults can be found all year round as it over-winters in its adult form. Its native range includes … Continued
Read more
22.04.2022 | Pond Ponderings