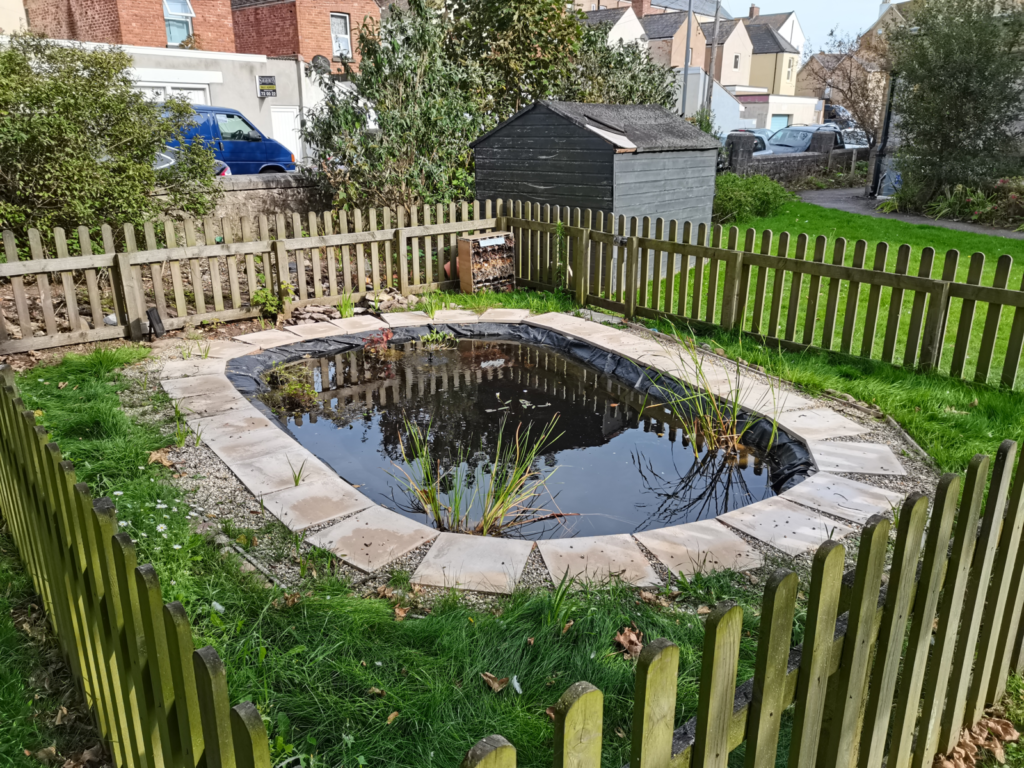 Our newest Pond Ponderings writer is Richard Spencer, who has worked on a fantastic pond project for the benefit of both people and dragonflies in Exmouth:

“St. Andrew’s House is a residential project in Exmouth for adults with a history of mental health problems, run by SAHA (Salvation Army Housing Association). Being a converted church and grounds, we were lucky enough to have an existing sizeable dug pond with a low wooden fence around it. The “Pond Project” began last year as an idea to make the pond area somewhere residents and pond-life alike would enjoy, and we soon realised it would be almost as much work as creating a pond from scratch.

The first task was to dig out all of the plant-life that had ruled unchecked for years, as this was thought to not be conducive to attracting the kind of wildlife we wanted. Also, the existing liner had split, so this had to be removed after the pond had been drained. We tried to rescue and temporarily home as much aquatic life as possible. The pond sits on a very slight incline so it does naturally drain away from the main garden area. When fitting the new liner, trimming it with a knife, and holding it in-place with cemented-in paving slabs, care was taken so that there was still a drainage channel at the lower end for when the rain does fall. The pond was filled up again with a hose overnight which did in the end overflow as it got forgotten about!

The overall plan for the pond from the outset included three main things: new plant-life growing from underwater, new pond-life living in the water (including possibly minnows, dragonfly larvae and tadpoles), and aquatic and non-aquatic life (frogs, newts and insects) in the area immediately around the pond. We intended to use the pond drainage area as a mini-wetland as we wanted to attract as many amphibians as possible. Also, we created a “Bug Hotel” from a wooden and metal wine rack, using twine, cardboard, twigs and stones.

Another part of the preparation of the pond area inside the fence was the planting of wildflower seed bought from the garden centre, as well as some underwater plants which were chosen to attract insects and especially dragonflies. We intend to source a bench to be sited in one corner, and a bird feeder and bath in the opposite corner.

Earlier this summer we were thrilled to observe a mature dragonfly hovering around the grassy plants  which we identified as a female Emperor, and later in the same summer we found sizeable dragonfly larvae while clearing out blanket weed, which we were careful to place back underwater.

Other parts of the overall plan yet to be implemented include bird’s nests hung from the overhanging trees and a “Toad Hall” built from layers of flat stones over the wetland area. Most of the work is now complete and we can look forward to the pond area giving enjoyment to residents, visitors and staff for years to come.”