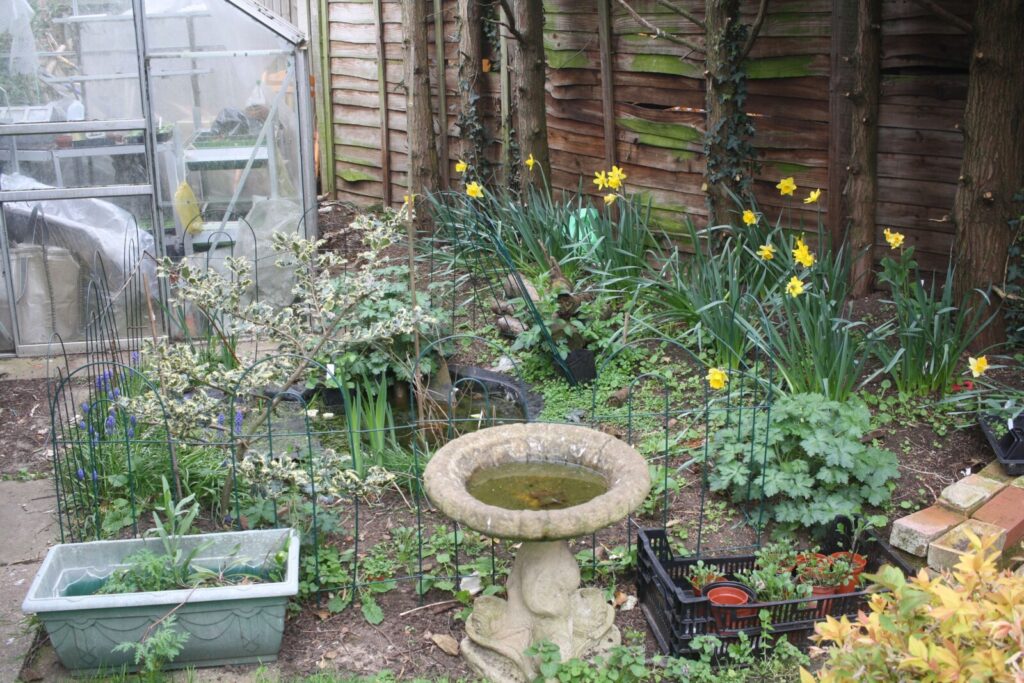 2020 really is shaping up to be the Year of the Dragonfly, as we have got another Pond Ponderings writer to introduce you to. Elizabeth Fairweather introduces us to her small pond in an urban garden in King’s Lynn, Norfolk:

“When I first started to recall details of our pond I was amazed to realise it had probably been a fixture in our King’s Lynn garden for around 15 years.

A small affair made from a pre-formed container, it started out with a fair degree of promise, attracting a few Large Red Damselflies. We photographed one or two and found an exuvia, which I assumed came from a Large Red, on a plant standing in the pond.  During a dipping session that summer, we netted a larva. 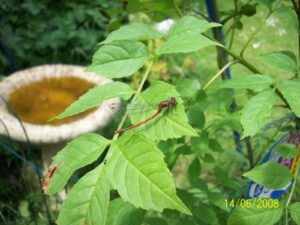 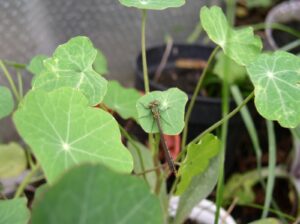 A few other dragonflies have come into the garden, which is on a big housing estate in Norfolk, from time to time. These included a Common Darter which perched on the pyracantha and one or two hawkers which kept flying over the lawn and round the fir tree.  A few minutes’ walk from our home is a reservoir which attracts several species of dragonflies and I enjoyed spending time over the summer recording details to contribute to the BDS State of Dragonflies 2020 Report. 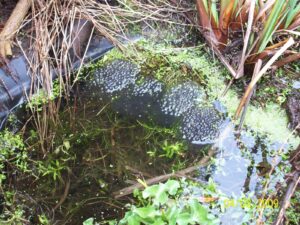 Our pond has attracted other wildlife over the years, with numerous blobs of frogspawn appearing and also several frogs. I even saw a pair mating one season. Unfortunately they have been absent during the last couple of years. 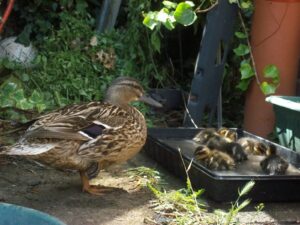 Not quite so ideal for a small pond were a Mallard couple, which raised a family in the garden for two years in succession. Newly born ducklings are ok, but the teenagers and adults are far too big for a pond measuring 53 inches (133cm) long by 33 inches (84cm) at its widest part.

Young ducklings cannot fly for several weeks and so they were trapped in our enclosed garden and proceeded to cause havoc. We saw them and the adults terrorise frogs they happened to come across; I’m not sure if they were trying to eat them or just to play with them. 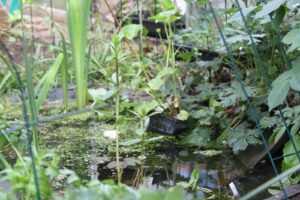 are hazy as to what plants were put in the pond at the beginning. Around the outside were types of primula and geranium. About four years ago, we put some irises from my daughter’s allotment pond into the garden pond, but they never flowered, perhaps because of a lack of light. And my son added a variegated holly plant. 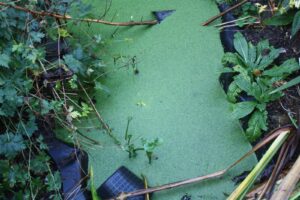 I suppose the pond just got a bit neglected, then some 12 months ago, we decided it was time to rejuvenate it in the hope we could entice some dragonflies to visit again. My husband spent ages poring over websites offering various plants and planning which to send for. I was given the great little book, “The Dragonfly- Friendly Gardener” by Ruary Mackenzie Dodds.

The plants arrived in May and were placed in the pond. The marsh marigold produced one or two cheerful yellow blooms and a purple loosestrife just kept growing until if fell over. A second purple loosestrife, which we think set itself on the opposite bank, flowered quite well. Two dwarf waterlilies went in, but did not do anything. Some oxygenating plants were included, and, to begin with, the water was reasonably clear. 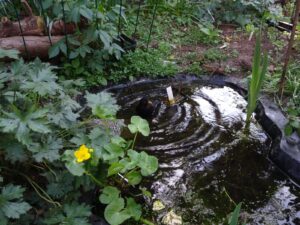 My daughter, a gardener, put her expertise into tidying the surrounding area and added some bulbs and other spring plants. She constructed a seating area close by so we could watch the wildlife arriving without frightening it off. Sitting near the pond last Good Friday I did have the treat of seeing a Blackbird take a bath in a shallow area of water. 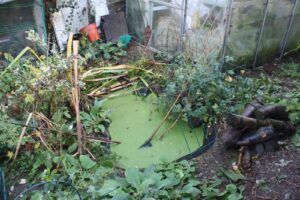 Disappointingly, nothing much happened after that. Gradually, the algae began to spread over the surface, possibly assisted by extra growth put on by some nearby conifer trees.  I suppose the pond may not be in the best place at the far end of our medium sized garden, but further along on one side is a large fir tree.

The soil in the garden is very dry and the whole area can become very hot in the summer.  On January 2nd, however, we measured the water in the deepest part of the pond to be around 11 inches (28cms).

My daughter recently cut the spreading conifers back. Hopefully, that will help the pond do its job of attracting wildlife over the coming year. 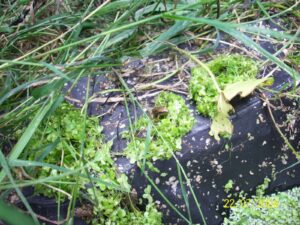 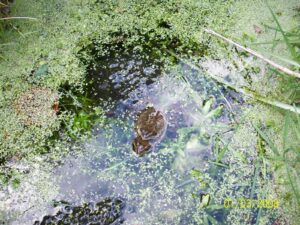