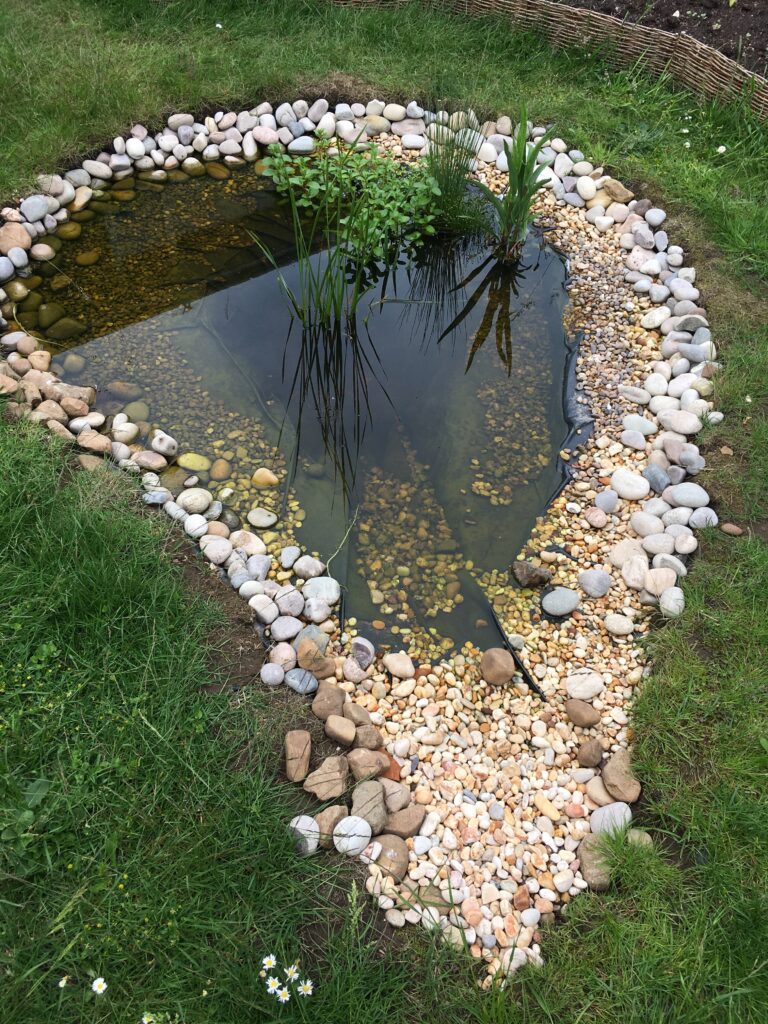 Mollie Thomas bring us an update from her unintentionally Avocado shaped pond in suburban York:

Avopond has progressed quickly through the warmer months. Shortly after the last update we bought some pond plants from our local garden centre, most of which were native species. These have flourished throughout the summer, putting on great displays of flowers as well as providing cover for pond species. We opted for Yellow Flag Iris, Lesser Spearwort, Marsh Marigold, Dagger Leaf Rush, Water mint and an oxygenator, Spiked Water Milfoil. Despite plants falling over on numerous occasions, all have survived and grown well.

Back in May the pond started to receive some attention from a number of bird species, using it daily to bathe and drink. This included a regular unexpected pair of Mallards that spent hours in the pond every day for 3 weeks solid. As entertaining as it was to have created our very own duck pond it did require daily trips to the pond to fish out plants that had been accidently kicked to the bottom by the ducks. The water also turned green which wasn’t particularly appealing however a week after the ducks departure it cleared up once again. Fear not if you attract a courting pair to your pond!

Further on into summer and the pond developed further as more aquatic life emerged and species such as Great Diving Beetles came on the scene. This gave us hope that we would soon be seeing species further up the food chain and not so many weeks later our wishes were granted!

First a Large Red Damselfly appeared pond side and then a couple of weeks later an Emperor Dragonfly was spotted laying eggs on the marginal plants which was fantastic to see as this was the whole aim of the ponds creation. We couldn’t believe that in such a short space of time we had managed to create a habitat suitable to support dragonflies to breed in our very own small suburban garden!

Then to top it off a couple of frogs have taken up residence in the pond and it really feels like its own mini ecosystem now. The rest of the garden is mainly donated to fruit and vegetable production with herbaceous borders. It definitely feels like the addition of the pond has brought in so many species to the garden that would not have been attracted without it and, this is one of the reasons why the crops this year have seemingly had very little damage from pest and disease as the pond has invited a natural army to control the situation.

Pond maintenance has been minimal throughout its development with only one session of removing some blanket weed which was threatening to take over. The weed was left by the pond side after removal with a stick to allow any aquatic creatures to return to the pond.

Avopond has far surpassed expectation for its first season and we are very excited to see how the pond develops in the coming years.