This project involved a small section of common land on the northern edge of the Preseli SAC. The aim was to improve access across the area for both people and livestock, whilst at the same time preserving and enhancing habitat conditions for the rare dragonflies the area supports.

Pensarn Corner is a complex of wetland habitats within an area of approx 100 metres by 100 metres. It contains a mixture of streams, bogs, flushes and pools. The area resides at the confluence of several small streams and contains important livestock access routes. The combination of these diverse wetland habitats and the disturbance by animals creates a unique set of conditions that supports the most important dragonfly community within Pembrokeshire. The key species here is the Southern Damselfly which occurs in some of the streams and flushes of the area. The main stream crossing the site also forms an important area for Scarce Blue-tailed Damselfly Ischnura pumilio which is listed as Near Threatened on the Red Data List. The combination of rare species with sustainable colonies in this area is not found anywhere else in Wales. Only in the New Forest in England may such conditions be replicated.

The area was at risk because access to the Common was becoming difficult and the streams were in danger of becoming choked up.

The BDS applied for and was granted funding from the Welsh Government through Environment Wales to carry out access improvement works that would preserve the unique habitat and improve access for walkers and graziers to the common. Once again the BDS worked in partnership with Natural Resources Wales and the Pembrokeshire Coast National Park Authority to achieve its aims. The support and co-operation of the landowner and local graziers was also of paramount importance for this project to achieve a successful outcome.

The main work consisted of widening the existing flooded track way used by livestock to access the common by approximately four feet using a mechanical digger. The material from this work was then used to create a piped bund to give people access to the common, Previously the terrain had been very treacherous in this area. The pipes in the bund allow water to flow through and will obviate the need for future drainage works. The other main advantage of the bund is that it will allow water levels to be maintained at the crossing point and upstream, even when flow rates are at their lowest during the summer.
In addition to these main works, stone and gravel were used to fill in some areas on and around the widened track. This further improved the access for livestock whilst creating and extending the area of shallow water flowing slowly over a silty-gravel bottom. This combination of works has created ideal conditions for some of our rarest dragonflies.
Overall this project will prevent the wet heath from drying out even if water levels drop and it has also improved conditions for those using the common. The project had the full support of the landowner and the co-operation of local graziers who have been able to see how site improvements for their livestock have also benefited important species of dragonfly. 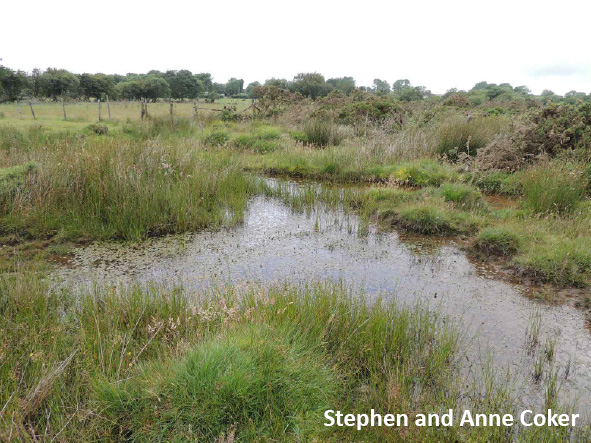 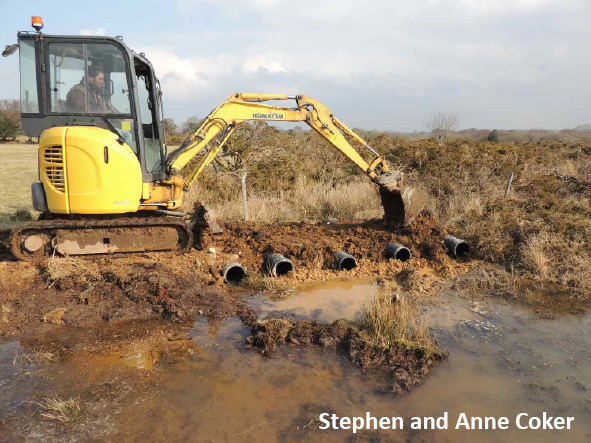 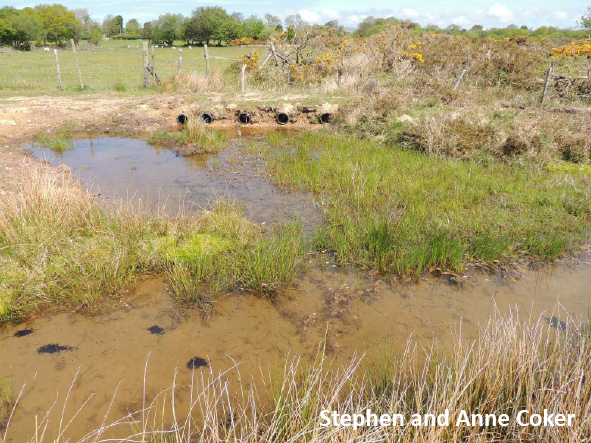