A Vagrant Emperor on the Gwent Levels in 2019, the second county record

Redhouse Barns, between Nash and Goldcliff, is my work-base at Newport Wetlands NNR, where I have worked since March 2001. On the morning of 3rd October 2019 at approximately 09:10hrs, I went to open up one of the barns, to take out a trailer. As I went to put the key into the padlock I noticed a hawker type dragonfly on it. It had been quite a cold night and the barn door faces north, so the dragonfly was still cold after, presumably, roosting on the padlock all night. I immediately realised it was a scarce, migrant dragonfly, but I wasn’t sure which species. I used my phone to take a photo of it on the padlock and then moved it to some nearby vegetation which was in the sun, so it could warm up and I could take some better pictures.

I thought it might have been a Lesser Emperor (Anax parthenope) at first before consulting my ID books, when I realised it was a Vagrant Emperor (Anax ephippiger) and this was confirmed by Chris Harris from the Living Levels Project who is the County Odonata Recorder for Herefordshire.

This was the second record of this species for Vice County 35, Monmouthshire. Unlike the first record, which was only seen by the finders, this one stayed around Redhouse Barns for several days and was seen by several observers, including Darryl Spittle (Gwent County Bird Recorder) and Lee Gregory. 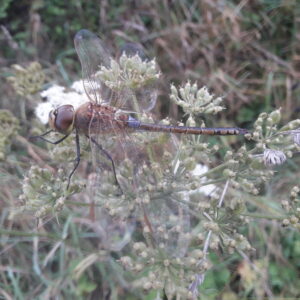 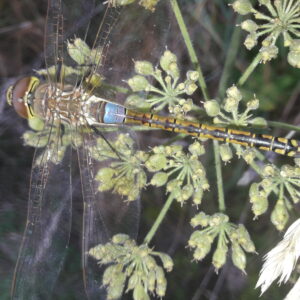 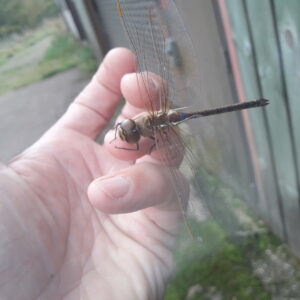 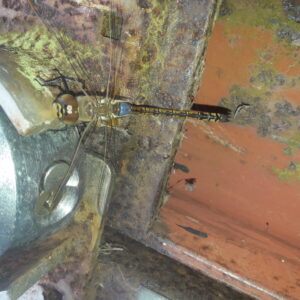 [2019 saw record numbers of Vagrant Emperors into Britain, with hundreds of individuals in total, occurring in three distinct waves, in spring, summer and autumn: the Gwent Levels individual occurred in the early part of the autumn wave. (Parr, Adrian J. (2020) A Record Year for the Vagrant Emperor Anax ephippiger (Burmeister, 1839) in Britain During 2019 Atropos 66: 30-39). The third Vagrant Emperor for the county was recorded in 2020, and more will no doubt follow. Steve Preddy]