Hello, and welcome to this year’s first update on dragonfly recording in Monmouthshire.

The most significant piece of news this time is that Monmouthshire has lost one of its dragonfly claims to fame, but don’t worry, it hasn’t gone far. In the unprecedented insect invasion year of 1995, Ian Smith recorded a Banded Darter (Sympetrum pedemontanum) near what is now the Heads of the Valleys road; this is a species which to date has not occurred again in the county, in Wales, or even in the whole of Britain. At my invitation, Ian has written up his find for the British Dragonfly Society website. In the course of writing this article, Ian revisited the site to verify exactly where he had seen the dragonfly, and it transpired that the locations at which it was seen were all just a couple of miles over the border in Breconshire. You can read Ian’s fascinating article here and the updated Monmouthshire dragonfly list can be found here.

The highlight of last year’s recording was the discovery of a population of Scarce Blue-tailed Damselfly (Ishnura pumilio) in the Llanwern area on the eastern edge of Newport by Paul Roberts and his colleagues who were carrying out a survey there. This is an insect which, in Monmouthshire, is confined to the moorlands of the northwest, but elsewhere in Britain it is known to colonise ephemeral water bodies away from its typical habitat, and it’s now done so here too. 24 other species were seen in the county in 2021, although surprisingly, there were no records of Red-eyed Damselfly (Erythromma najas).

We’re now into the third year of the Monmouthshire dragonfly atlas project and I will soon start producing maps showing the coverage of dragonfly records across the county, and maps of the distribution of each species. The British Dragonfly Society has funded a copy of the DMAP mapping software, which is very widely used for producing atlas maps, so look out for the results starting to appear on the website later in the year.

I have produced a map of the county showing areas where we have no recent records, to help recorders identify areas to search this season: a copy is at the end of this update. Records from anywhere in the county are valuable, but records from these areas will be particularly welcome, to help us create more complete distribution maps for our local species.

In the last update, I mentioned that we have produced a list of species of local conservation importance (species whose presence can indicate an important dragonfly site). This list has now been reviewed against national criteria developed by the British Dragonfly Society and one some small change made to bring it in line with lists for other similar counties. The new version can be found here.

Some of you may be aware of the iNaturalist website, which enables people to upload wildlife photos and seek opinions on the identification of the photographed subjects. The people behind iNaturalist have agreed with the Biological Records Centre (the UK organisation which co-ordinates wildlife recording) that any details of dragonflies positively identified on the site can be shared with county dragonfly recorders, which is great, as this helps even more people to become involved with building up our collection of records. There have been some teething problems, mainly because iNaturalist adds licence conditions to the data after it has been uploaded to their site but before it is shared with others, so I have had to obtain permission from the originators of the data to enable us to use it; but once that has been obtained it’s a valuable extra source of data, and the photos make it much easier to confirm the identification of any unusual records.

How to contribute records

Any and all records of dragonflies in the county are welcome. The simplest and most problem-free way to contribute your records is to enter them into iRecord, but if you’d prefer a different method, please get in touch.

Can you spread the word?

There are now over 100 people on the distribution list for these email updates, but anyone with an interest in the dragonflies of the county is welcome to join. If you know of someone who would like to receive these emails, please put them in touch.

Blue circles represent records from 2020 and 2021; the red ellipses are areas without any records. 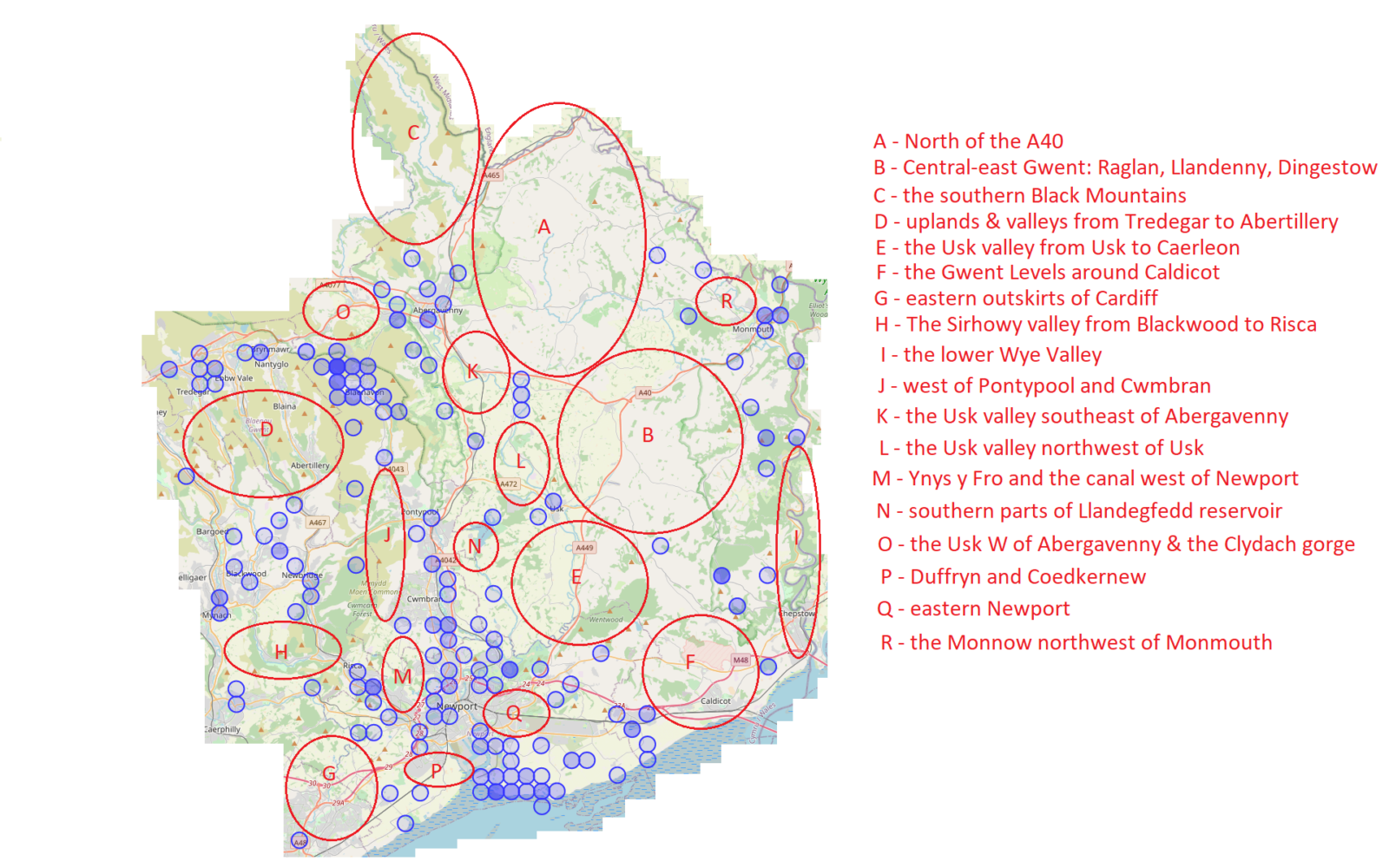 Back to updates index

Back to Monmouthshire main page