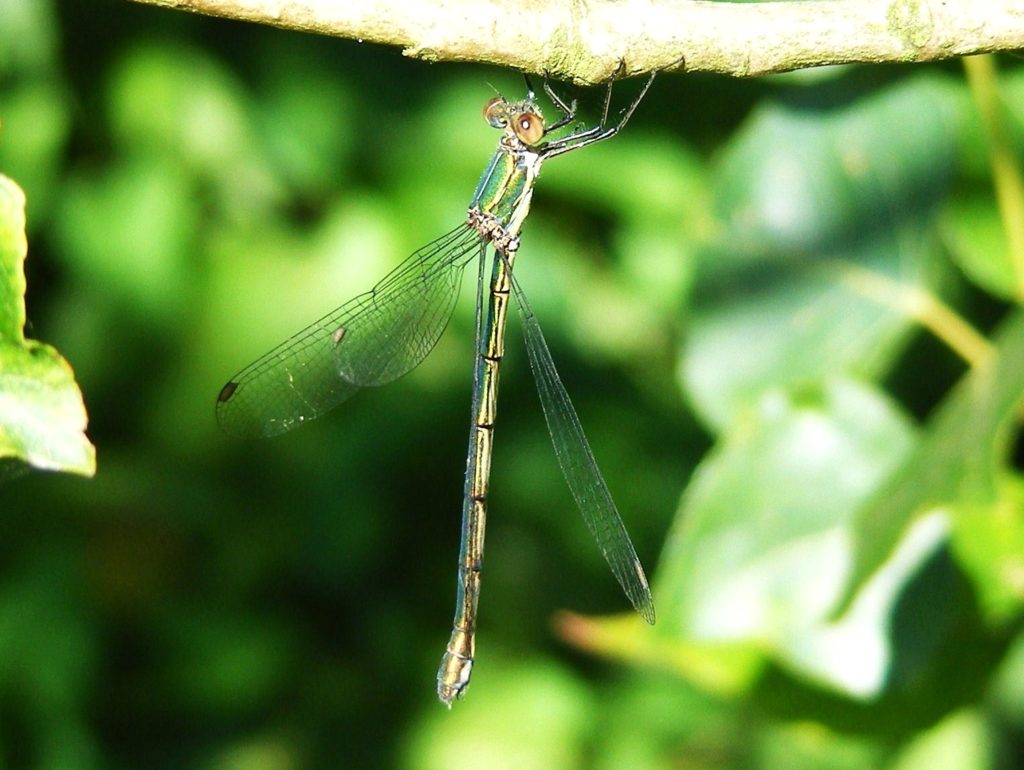 The Willow Emerald Damselfly is Spreading in England!

The Willow Emerald Damselfly is a recent colonist to South East England. A new site has been discovered away from known areas and we now think there may be more undiscovered sites for this species.

Willow Emerald Damselfly (Chalcolestes viridis) is one of Britain’s new colonist species. It first appeared in East Anglia around 2007, and is now well-established in a few areas of south-east England. Willow Emerald Damselflies fly quite late in the season, with a peak in records occurring during August-September, though occasional individuals may be seen even into November in favourable years. Although broadly similar to other emerald damselflies, from which it can be distinguished by the pale pterostigmata (wing-spots) and characteristic patterning on the sides of the thorax, the Willow Emerald is notable for the female laying eggs into the branches of trees and shrubs overhanging water (a large number of soft-barked species are used, not just willows!). Look carefully at the bark of branches of waterside trees for the characteristic pattern of galls indicating that Willow Emerald oviposition has taken place. Our species information page (www.british-dragonflies.org.uk/species/willow-emerald-damselfly) has photos of the gall patterns on bark. Even when not showing breeding behaviour, both males and females spend much of their time in the trees, and observers therefore need a different search strategy to normal when attempting to find the species.

Although now well established in east Norfolk, Suffolk, Essex and north Kent, on 28 August 2014, David Chelmick and John Luck found a thriving colony near Redhill in Surrey. This is sufficiently far from other known sites as to suggest that the species may be more widespread than previously believed, but peripheral colonies are going largely overlooked. We would therefore like to encourage you to be on the lookout for the species this autumn. Individuals typically perch on the end of branches (often those that are rather bare and partially exposed), hanging off at an angle of 45o with their wings half open. Their silhouette is very characteristic when you know what to look for. You can also discover new sites for this species when there are no adults about. It will be interesting to see if other apparently ‘extra-limital’ colonies are discovered this autumn.