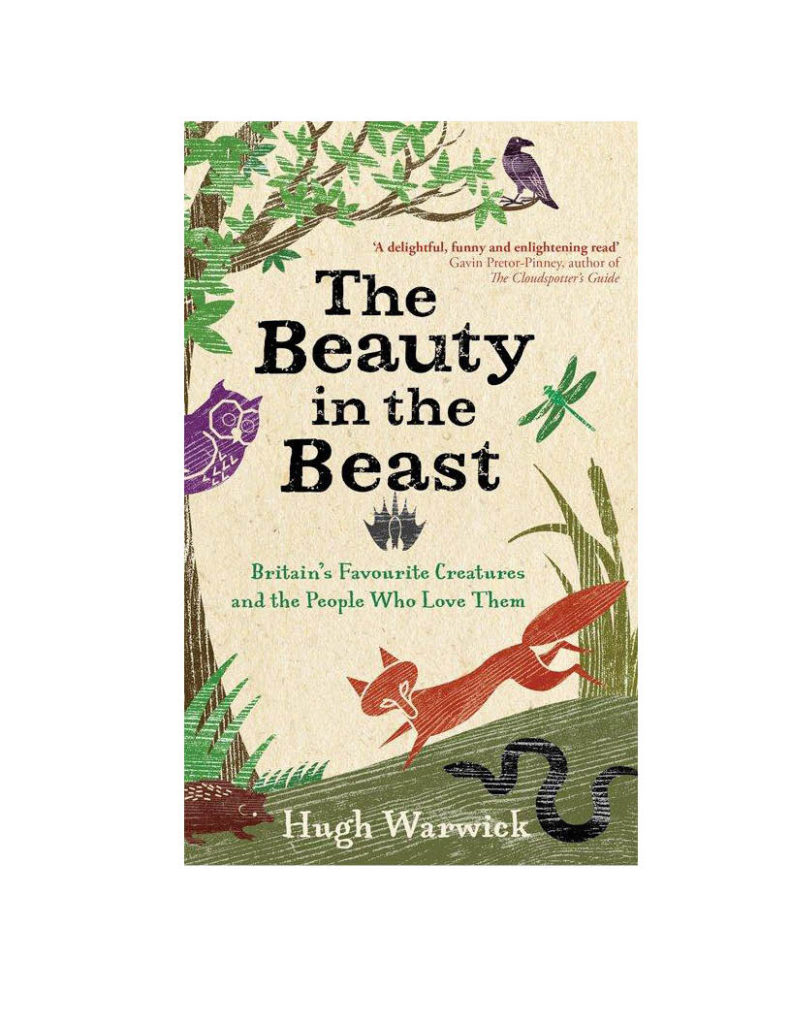 The Beauty in the Beast

Hugh Warwick, animal enthusiast, and hedgehog fanatic, writes a series of affectionate and lively homages to the animals of the British Isles. There are 15 chapters which include Solitary Bees, Toads, Water Voles, Badgers and Bats.  The book is an enjoyable read and puts across dragonflies in an accessible way.

Meet the water vole-woman from Shropshire, the owl-man from Somerset, the beaver-man from Perthshire, and the mid-Wales badger-man. These, and many others, are all fabulously engaging British characters who manage to carry a deep knowledge of their chosen species within a distinctly quirky shell. Other animals making an appearance include otters, bats, dolphins, dragonflies, foxes, adders, and the very special toad.

Bees – Only female bees can sting.

Badgers – If a badger urinates on you, it means it has accepted you into its family!

Bats – A bat’s ‘feeding noise’ is known as a raspberry as it sounds like breaking wind.

Dragonflies – Dragonflies have tiny shock absorbers in their neck, so even as their body vibrates thousands of times a minute, their head remains perfectly still.

Sparrows – Unlike most small birds, sparrows mate for life.

Water Voles – Ratty in The Wind in the Willows is actually a water vole.

Moths – Moths have to be put in a deep freeze for four days before going on display in a museum in case they destroy stuffed specimens.

Dolphins – Male dolphins kill porpoises as ‘target practice’ for killing rivals’ baby dolphins, which are the same size as a porpoise.

Owls – One owl cannot make the ’tw it-twhoo’ sound alone.  A female makes the ‘twit’ and a male, the ‘whoo’.

Robins – Only in Britain are robins not persecuted because people eat them.

Toads – Toads were the first land animals, emerging around 300 million years ago. Humans (and all land-dwelling creatures) evolved from proto-toads.

Otters – While otter-hunting is now illegal, as many are killed on the roads each year as were killed during hunts.

Beavers – When gnawing, beavers stop every ten minutes or so to ‘self-sharpen’ their upper teeth using the hard enamel of the lower incisors.

Adders – When males are looking for a mate, they ‘dance’ to attract a female.

Hugh Warwick is an environmental writer and photographer, whose work has appeared across print media from BBC Wildlife and New Scientist,  to the Daily Telegraph (for whom he was the unofficial hedgehog correspondent for a while), to radio documentaries for BBC Radio 4, and his appearance as the ‘Eco-Warrior’ on Fred McAuley’s Radio Scotland show. Hugh has studied hedgehogs for over 20 years and has most recently been responsible for stopping the ‘great hedgehog massacre’ of Uist in the Outer Hebrides. He regularly gives popular, sell-out talks at a broad range of UK festivals and organizations.

The Beauty in the Beast is available now at a cost of £14.99 and is published by Simon & Schuster.