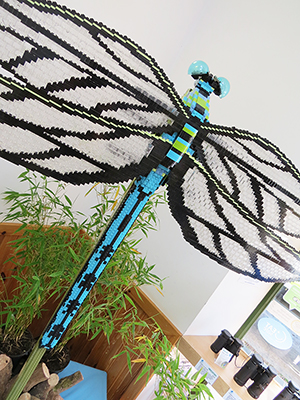 The British Dragonfly Society runs the Scottish Hotspots Project with the aim of promoting dragonflies and their wetland habitats across Scotland. Our hotspots are special places, chosen for a combination of a good dragonfly assemblage, easy access for visitors and a thriving local community keen to get involved with dragonfly conservation and events.

WWT Caerlaverock is the latest in a growing list of brilliant dragonfly sites, all of which can be found here. The site celebrated the announcement with the installation of a huge LEGO® dragonfly, christened Emily, over the summer! Brian Morrell, Centre Manager, said: “We are pleased to welcome our new LEGO® brick dragonfly to WWT Caerlaverock for the summer and are excited about working with the British Dragonfly Society to become a Dragonfly Hotspot”.

Daniele Muir, BDS Scotland Officer, said: "There are five species of damselfly and 5 species of dragonfly to spot around the reserve, including the Emperor Dragonfly, one of our largest and most brightly coloured species."

To learn more about the Scottish Hotspots Project click here.

Junior Rangers play an important role in looking after Protected Areas in the UK and the wildlife that lives there. By becoming a Junior Ranger you will have the opportunity to develop new life skills and gain experience completing outdoor practical tasks. You’ll also get a chance to socialise with like-minded volunteers and explore some … Continued
Read more
30.04.2021 | Uncategorized

Get your Local Places for Nature pack!

Local Places for Nature is back! Nature is under threat and it’s time to take action. Keep Wales Tidy is excited to announce that applications for Local Places for Nature have reopened. Last year, more than 500 green spaces across the country were created, restored and enhanced. Community groups and organisations of all shapes and … Continued
Read more