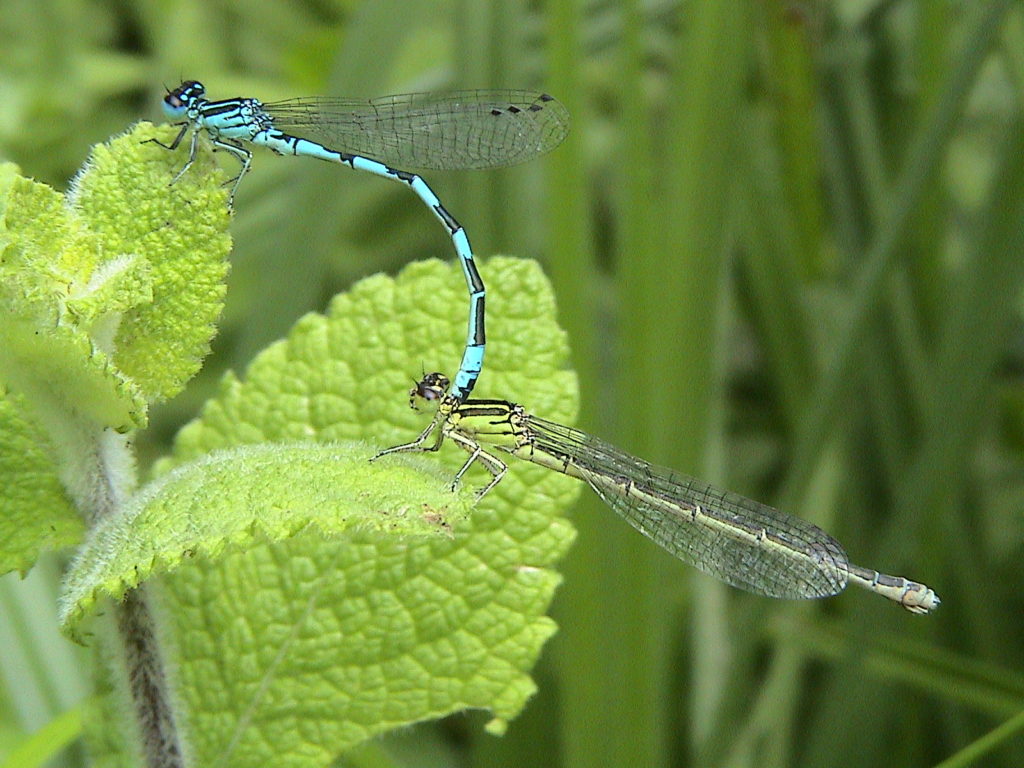 A beautiful but endangered damselfly is being  helped thanks to habitat work funded by Environment Wales. This exciting partnership between the British Dragonfly Society (BDS),  Pembrokeshire Coast National Park Authority (PCNPA) and Countryside Council for Wales (CCW) has created  valuable new habitat for the rare Southern Damselfly.

A high-priority BAP species, the Southern Damselfly is described as ‘Endangered’ in the Red Data Book and is protected by both UK and European law. It is found in Anglesey, the Gower, Pembrokeshire and Southern England – particularly Devon and the New Forest.

One of its UK strongholds is Pembrokeshire. The species has dramatically declined here because there is insufficient grazing by heavy livestock at some of its sites. This has resulted in its habitat becoming overgrown.

The project managed by the BDS and supervised by our volunteers has created new habitat using a digger. Through the partnership, the BDS provided expert species  knowledge and habitat management advice. The PCNPA who own and manage the site, assessed the suitability of the ground conditions for creating Southern Damselfly habitat. PCNPA also organised the digger work and provided  invaluable site knowledge to ensure the success of this habitat creation work.

The digger created shallow streams leading from natural springs found on site. These improvements have regraded the bank profile of ditches, improved accessibility for livestock and created shallow streams and pools. Two pools were created on the site in 2005, so aquatic vegetation should colonise the new areas. There are Southern Damselfly colonies nearby, so it is hoped that it will not be long before this beautiful insect is found on the site. Ponies graze the site as part of the habitat management.

“This partnership project is great for the Southern Damselfly which is declining in Pembrokeshire and needs areas of habitat that will be maintained by grazing”, said Claire Install, BDS Conservation Officer.

Claire adds, “The Southern Damselfly has specific habitat requirements. In heathlands it’s found in areas with shallow base-rich streams and flushes. These habitats are reliant upon heavy grazing animals, like cattle or horses, to maintain short, open vegetation and bare trampled areas that the damselflies require”.

This partnership work is supported by Environment Wales, with funding from the Welsh Assembly Government, and by the Countryside Council for Wales as part of its programme of research into sustaining natural beauty, wildlife and outdoor enjoyment in rural Wales and its inshore waters.

The Southern Damselfly is about the length of a matchstick. Males are blue and black and the females are green and black. This is confusing as there are seven blue and black damselflies found throughout the UK. However,  Southern Damselfly are identified by looking at the markings just below its wings. Here there is a marking similar to the astrological symbol for the planet Mercury.