A Southern Migrant Hawker at Llandegfedd reservoir in 2019, the first county record

It all started with a totally spontaneous trip to Llandegfedd Reservoir, on 16 August 2019. A visit there would usually be bird-oriented, but this time the intent was to add more dragonfly species to my year-list. Craig Constance and I have exchanged wildlife knowledge for years, and this year was the year of the dragon, so to speak, as many new species were added to our lists. I picked Craig up, parking at the north end of Llandegfedd and went straight to all the usual hotspots, checking the ponds at the inlet, the reen on the island, and the shallower waters of Green Pool. Conditions were perfect, and from Green Pool hide there were several medium-large hawkers on the wing, mostly Migrant Hawkers but also a Southern Hawker.

Sitting at either side of the hide, we watched one of the hawkers come very close, so close that I could no longer see it from my window. It perched right in front of Craig, for long enough for him to realise this was something different, though he wasn’t quite sure exactly what it was, so I came over to look from his window. That is when I started to go a little pale in the face with sheer excitement, as not only was it a new species for me, it was a spectacular male Southern Migrant Hawker. I was so excited at that moment that I didn’t even get a photograph: I instantly got on the phone to Lee Gregory, another close friend, who also happens to be a fantastic naturalist, and he assured me that what we saw was indeed the real deal as I described it to him down the phone. At that point it had disappeared and we scanned every single dragonfly that entered our airspace, in the hope that it would return. By the time it did, Lee was already in the hide with us and just like magic, there it was, at exactly the same spot, perched up and easily photographable.

The dragonfly remained in the area for a few days but was quite difficult to pin down after that, as it often hunted all around the meadows, sometimes high up behind large oak trees to get out of any wind. Locating it was also made difficult by the sheer number of Migrant Hawkers that year, in what ended up being a good year in general for dragonflies. 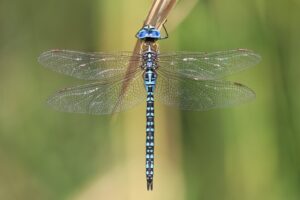 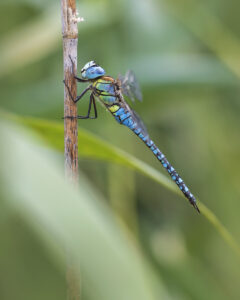