Red-veined Darters at Goldcliff in 2000, the first county record

I was employed as Warden on the Gwent Levels Wetland Reserve (GLWR), now the Newport Wetlands, during spring 2000 – spring 2002. This account was written in 2020 and my recollection of events from twenty years ago is a little vague, but I seem to recall that there had been reports of Red-veined Darter (Sympetrum fonscolombii) in Glamorgan, and with the newly created lagoons at Goldcliff and Uskmouth, I was hopeful that the muddy margins exposed during water level draw down would be attractive to the species. I was familiar with this species’ association with recently created lagoons and pools in Kent, where I had lived and worked for the decade prior to moving to Gwent.

I have reviewed my notebooks from the time and found the following details. On 5 July 2000, I recorded ‘Red-veined Darter reported’ in my daily notebook for GLWR. Unfortunately I have no further details, so am not sure who was responsible for this report or the location. On 17 July, I noted two male Red-veined Darters on the margins of the lagoons at Goldcliff. I also noted that many Common Darters were present and ovipositing in tandem on this date. Both individuals resting on bare mud on edge of lagoons and returning to same area shortly after being ‘flushed’, allowing close approach and good views. 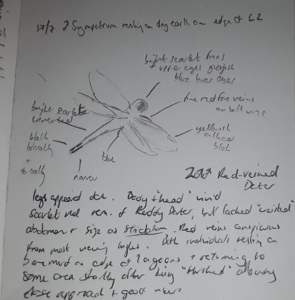 [These two individuals represent the first records of Red-veined Darter from Monmouthshire, and the only subsequent sightings were also at Goldcliff, two years later: see the article by Kevin Dupé here. No photos were obtained, but Adam’s and Kevin’s careful field notes provide useful corroborating information for the two records. Other Sympetrum darter species can show red veins in the wings, but they are never as prominent as in this species. The bi-coloured eye, with a blue lower half, is a key feature of Red-veined Darter; in fully mature males, the upper part is vivid dark red, but this colour can take some time to develop and early on, this area can look pink or grey. Steve Preddy]