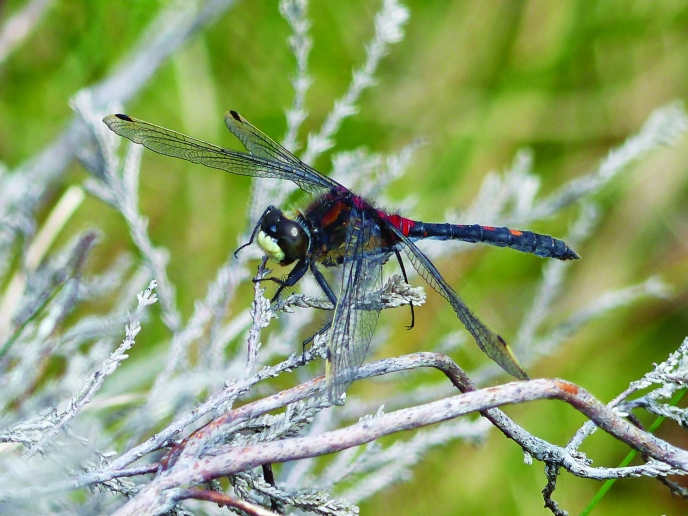 An exciting conservation project is introducing one of Britain’s rarest dragonflies – the White-faced Darter – to Drumburgh Moss. It’s a small, dark dragonfly with a distinctive white face and, after decades of decline, its English populations are now restricted to a handful of known sites. Cumbria Wildlife Trust, the British Dragonfly Society and Natural England have launched a programme to introduce this rare species at Drumburgh Moss National Nature Reserve near Carlisle. Phase one started in April when staff and volunteers collected over 100 dragonfly larvae from a healthy donor population and released them into specially created pools at the nature reserve.

The decline of white-faced darters in Britain is linked to the destruction of the habitat they depend on – peatlands with deep bog-pools. Kevin Scott, Reserves Officer at Cumbria Wildlife Trust explains: “Lowland peat bog habitat like this is extremely rare due to around 95% of it having been destroyed, mostly to make peat compost, with bog pools drying out because of drainage and poor management. This is a national tragedy as these peatlands are home to some important species, many of which are under serious threat. Breeding birds include curlew and snipe; reptiles include adders and common lizards. There are also many specialist plants and invertebrates that rely on these peatlands: sundews, cranberry and bog bush crickets to name a few. These peatlands are also incredibly important for the environment as they are highly efficient carbon sinks, removing and ‘locking up’ carbon from the atmosphere.”

Drumburgh Moss was chosen for the dragonfly introduction project as it has over 150 hectares of restored peatbogs, the ideal breeding ground for this species, with quantities of floating Sphagnum moss, which the dragonflies need for laying their eggs.

The Trust has already successfully reintroduced the white-faced darter (Leucorrhinia dubia) at Foulshaw Moss Nature Reserve in the south of the county. Kevin continues: “The restoration works we have successfully carried out on the peatlands at Drumburgh Moss have created an ideal habitat for the white-faced darter and although the species has not been recorded on this particular reserve before, it has occurred in the Solway area in the past and its introduction here is crucial to ensure its continued survival in the north of England. We hope and expect this project to be as successful at the similar project carried out at Foulshaw Moss from 2010.”