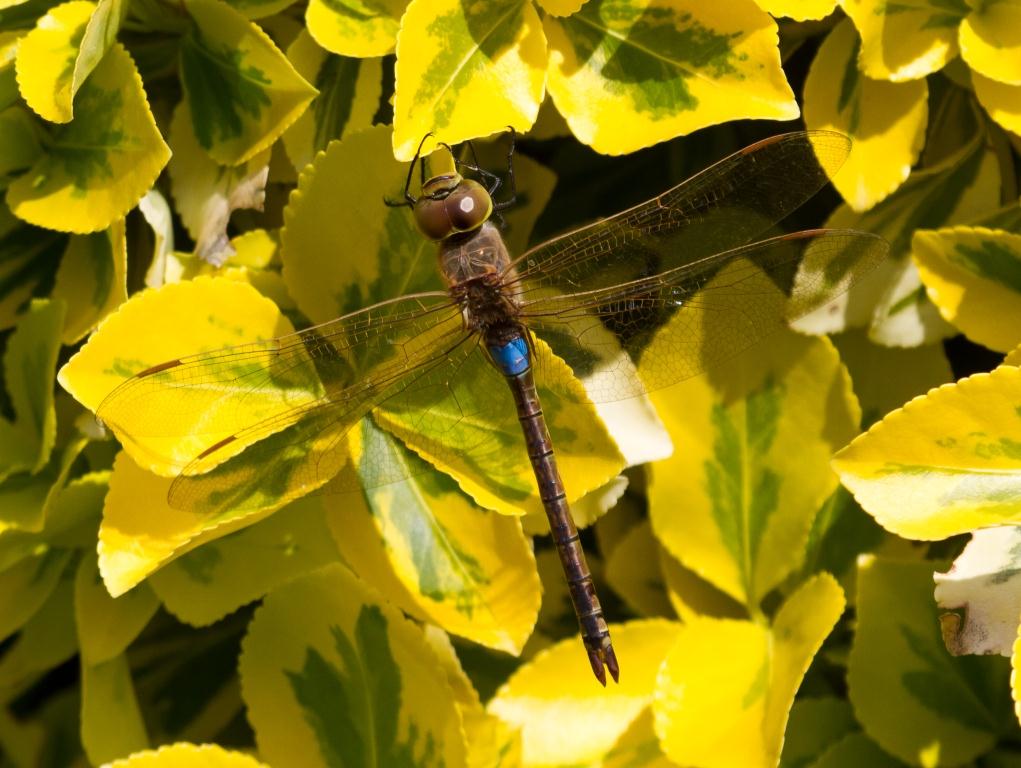 At a time when the world has been focussed on events in North Africa and the Middle East, large numbers of predatory invaders have been silently invading Europe … and some of these have reached Britain! The invaders in question are brownish dragonflies known as Vagrant Emperors.  Last week two reached the south-west of England, following three other confirmed sightings of this species since last October.  The latest sightings were of a male photographed in Plymouth on 15th April and a female who chose to rest on some washing in Penryn, Cornwall, the following day. Both sexes are brown, though the male has a bright blue segment at the base of the abdomen, next to the wings. In addition to 44 species of dragonfly and damselfly seen regularly in the UK, a further ten species have been found on rare occasions.  The Vagrant Emperor is one of these ten.

A male Vagrant Emperor was discovered in Cornwall on 14 October 2010, the first in the UK since about 20 appeared in the early months of 1998. Recent reports indicate that large numbers of Vagrant Emperors were to be found in North Africa and the Middle East last winter – presumably reflecting a good rainy season and high breeding success further south during the preceding months. As soon as mild, southerly winds arrived in Britain after last December’s severe weather, a Vagrant Emperor was found in Pembrokeshire on 9 January. This was followed by one in Cornwall on 19 February. Unidentified dragonflies almost certainly of this species were also seen in Devon and Somerset in early January and in Cheshire on 24th March. Their appearance during our winter months attracts attention, as none of our native dragonflies can be seen as flying adults then.

The Vagrant Emperor (Anax ephippiger, formerly Hemianax ephippiger) is a well-known migrant, forced to leave breeding ponds as they dry up.  Their aquatic larvae are able to complete their growth very quickly, in two or three months. After good winter rains around the Sahara, hordes may disperse in large numbers. However, when dusty desert winds blow towards northern Europe, Vagrant Emperors can drift further than normal. Indeed, it is the only species of dragonfly to have been found in Iceland and has even crossed the Atlantic to reach the Caribbean. It is increasingly being found around the Mediterranean, where populations build up during the spring and summer before apparently moving back south in autumn.

Recent sightings outside the UK have included many thousands in southern Israel in mid-March, numbers that are seen only rarely.  Thousands of Vagrant Emperors were also seen in the United Arab Emirates, along the coast and 100km inland into the desert; the observer had seen very few dragonflies here during the previous nine years.  Within Europe, very large numbers of Vagrant Emperors were reported moving northwards though Portugal, with up to 20 per minute being seen on 6th April. Large numbers have also been reported this month in southern and central Spain.  The southerly winds that have made for such a pleasant April in the UK – with temperatures currently averaging several degrees above the norm – have helped this movement.  Further north, two males were seen in the Faeroe Islands around 13th April – these being the first ever dragonflies identified there! It is likely that more individuals will be reported from northern Europe in the coming days, and observers in Britain are encouraged to be on the lookout for the species.

Another benefit of the warm spring weather in Britain has been the early emergence of several of our resident dragonflies and damselflies. Living for most of their lives as underwater larvae, the adults emerge in spring and throughout the summer. The earliest sighting – of a Large Red Damselfly, invariably the first species to emerge – was in Cornwall on 27th March. Whilst this particular individual isn’t an all-time record, several other counties have also reported early sightings, often beating records set during the very mild start to the spring of 2007. Eleven species have been reported on the wing as at 18th April, and given the continuing good weather forecast for the coming week, this number is likely to rise over the coming days.

Steve Jones has written an interesting review of his experiences and observations of the Vagrant Emperor on his “Cornish Nature” website.