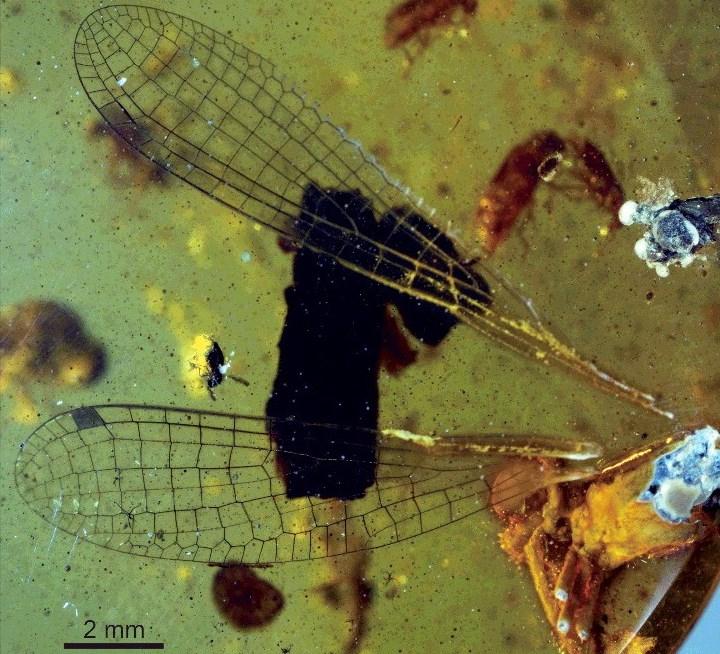 Sir David Attenborough received a belated 90th Birthday present last month:Mesosticta davidattenboroughi, a newly discovered extinct species of Damselfly, dating back to the mid-Cretaceous, has been named in his honour.

This new species of Shadowdamsel (Family Platystictidae) was found fossilized in Burmese amber, in the Hukawng Valley of Kachin Province in Myanmar.

“Dragonflies in amber are extremely rare and the recent discoveries by my Chinese colleagues are a new window on the past” said the study’s co-author Edmund Jarzembowski, a scientist at the Natural History Museum in London. "Sir David was delighted because he is not only interested in the story of amber, but also is a president of the British Dragonfly Society."

Amber is the fossilized form of tree resin; when a tree’s bark is damaged, resin is produced to seal and sterilise the wound.  In doing so, organic matter, such as small insects, can become entrapped in the sticky substance and are preserved as the resin hardens over millions of years.

Fossil records of Odonata are relatively uncommon in comparison to other insects, and this specimen is only the third-known fossil species of Platystictidae.
Through advanced photo-technology the study’s team where able to identify notable differences in wing structure of M. davidattenboroughi compare to other fossils, in particular, its short wing length, which confirmed its status as a new species and the first fossil group of modern Platystictid damselflies.